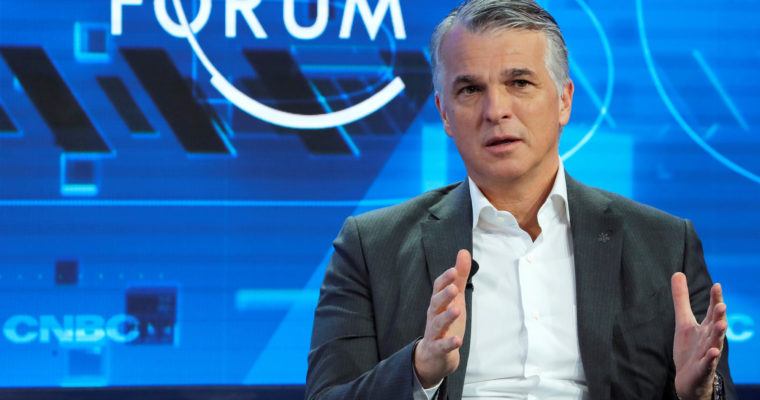 Speaking at a CNBC panel at the World Economic Forum in Davos, Sergio Ermotti, the chief executive officer of Swiss bank UBS said the massive December sell-off was the result of political fears as well as the reality setting in that the Fed is tightening up the money spigots.

In October of last year an analyst at Market Watch pointed out:

There are only two other times in history that stocks were more expensive than they are today: just before the Great Depression hit and in the 1999 run-up to the dotcom bubble burst.

“The implied assumption that we hear about liquidity being there, being able to step in and function the leveling out tensions, is the wrong assumption,” adding with some dramatic flair that, “liquidity can freeze very easily, like the water in Davos.”

As a report on Ermotti’s talk for CNBC.com explained:

Stocks got dumped amid concerns of an economic slowdown and fears the Federal Reserve might be tightening conditions to a point where liquidity in markets could dry up. For investors, liquidity is the ability to sell an asset reasonably quickly and at a price close to where it last traded.

The Federal Reserve open market committee raised interest rates for the fourth time in 2018 last month, and the ninth time the Fed has hiked rates since it began raising them from functionally zero percent interest rates three years ago.

To say, as UBS’s Ermotti did in Davos last week, that equity prices depend on the last ten years’ radical experiment in monetary liquidity, unprecedented even for the Federal Reserve, is to admit that they are woefully overpriced.

The logical and necessary corollary and conclusion to what Ermotti is saying is: no serious investor would buy these securities with real money, only with the easy money being lent out at artificially low rates by a central bank that can create as much of it as it wants.

Lest you think, I’m putting words in Ermotti’s mouth, here’s more from the CNBC report:

The Swiss banker said many of the world’s bigger investors were now managing money for others and, unlike banks, they not might stand by willing and able to trade an asset just to ensure markets run smoothly.

Just to ensure markets run smoothly. What does “run smoothly” mean? Obviously, it’s a euphemism and not a technical term. And obviously in this context, it means when markets don’t reflect losses by evaluating equities on the basis of their objective value, but on the ability of the trader to sell them to a greater fool flush with that easy Fed money for a higher price.

How The Fed Turns Equities Into A Ponzi Scheme

Then why were U.S. equities so overvalued last year, while foreign equities were so undervalued, even though U.S. stocks were paying an estimated forward dividend yield of 1.84% while emerging markets were paying 3.35%, fully 82% higher?

The losses from overpaying for an overpriced asset like a share in a U.S. publicly traded company circa November 2018 are diffused throughout the entire monetary base and absorbed by anyone who holds U.S. dollars when they go to spend them and find they are worth a little less every year.

What’s 2% inflation? That’s nothing right? No, it’s definitely not nothing. It’s billions and billions of dollars constantly being stolen from the entire economy and redistributed to the investment banking class via the central bank. And if you do the math, the result is these bankers steal half of the cash in the economy every 30 years.

And when there is the occasional market correction after years of easy money and malinvestment in a speculative bubble driven by monetary expansion, the last greater fool holding the hot potato takes a big loss like we saw last month.

I could just bathe in these bankers’ tears:

They have a lot of capital that could be deployed but they are not going to go in to make markets in the way banks used to. They are going in as a fiduciary, to make money for their investors, and those are the dynamics that everyone is struggling with.

Wow. These are the dynamics institutional financiers are struggling with:

Having to actually make good investments because the Federal Reserve won’t steal as much money as they have been from everyone else to pump banks full of more cash to keep passing the same hot potatoes back and forth to each other. They might actually have to be real, talented investors now without that constant monetary bailout. #FirstWorldProblems #TheStruggleIsReal