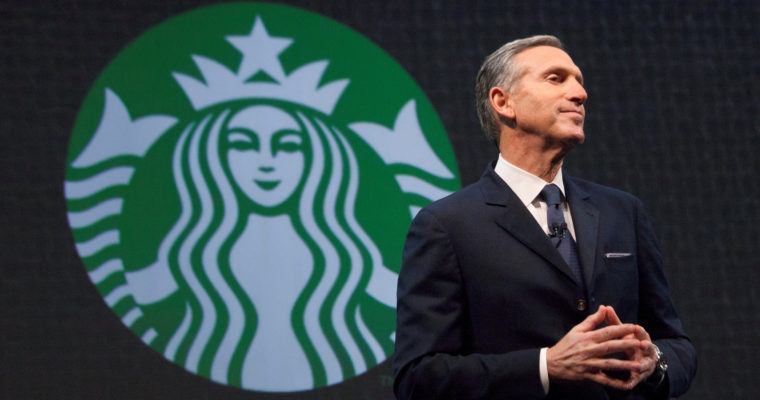 Billionaire Howard Schultz ― the bitcoin-bashing former CEO of Starbucks ― is considering running for US president because he’s disgusted with the bitter political gridlock he sees today.

Schultz announced on Twitter that he would run as a “centrist independent” because he’s fed up with the entrenched, ineffective two-party system in the United States.

I love our country, and I am seriously considering running for president as a centrist independent.

This moment is like no other. Our two parties are more divided than ever. Let’s discuss how we can come together to create opportunities for more people. #ReimagineUS https://t.co/9UY46OTO0I

Schultz blasted both Democrats and Republicans, saying their petty, destructive partisan warfare does not serve the American people.

“We’re living at a most-fragile time,” Schultz told 60 Minutes (video below). “Not only the fact that this president is not qualified, but the fact that both parties are consistently not doing what’s necessary on behalf of the American people.

[Politicians] are engaged, every single day, in revenge politics.

Schultz: Bitcoin Is Illegitimate and Has No Future

So how would a US presidency under Howard Schultz impact bitcoin and the blockchain industry? It’s hard to say. Schultz has previously slammed bitcoin, saying it has no future and is not “legitimate.”

“I don’t believe that bitcoin is going to be a currency today or in the future,” Schultz said in January 2018.

Schultz said that another, more trusted, crypto (other than bitcoin) could become the currency of the future. However, it must tethered to a “legitimate” brick-and-mortar establishment “where the consumer has trust and confidence in the company that is providing the transaction,” he underscored.

Schultz does not oppose all crypto, and admitted that digital currencies could play an important role in a cashless future. Moreover, Schultz is a fan of blockchain technology.

He even hinted that Starbucks ― which has more than 28,000 locations worldwide ― is considering integrating blockchain into its mobile app.

I think blockchain technology is probably the rails in which an integrated app at Starbucks will be sitting on top of.

Howard Schultz ― whose net worth tops $3.3 billion ― was the CEO of Starbucks from 1986 to 2000 and again from 2008 to 2017. He now joins a growing list of liberal candidates who have publicly announced their candidacy.

Another progressive politician who has thrown their hat in the ring is Democrat Congresswoman Tulsi Gabbard of Hawaii.

As CCN reported, Gabbard electrified the media when she declared her candidacy two weeks ago. The crypto community took note once news surfaced that Gabbard had invested in crypto.

Financial disclosure reports showed that Gabbard had bought $1,001 to $15,000 of Ether and Litecoin in December 2017.

At the time, the bitcoin price approached a record high of almost $20,000. It’s unclear how much crypto Gabbard currently holds.

Obviously, it’s too early to predict who will win the 2020 US presidential election. But crypto-centric issues may emerge as topics that politicians could be forced to address as the industry expands.