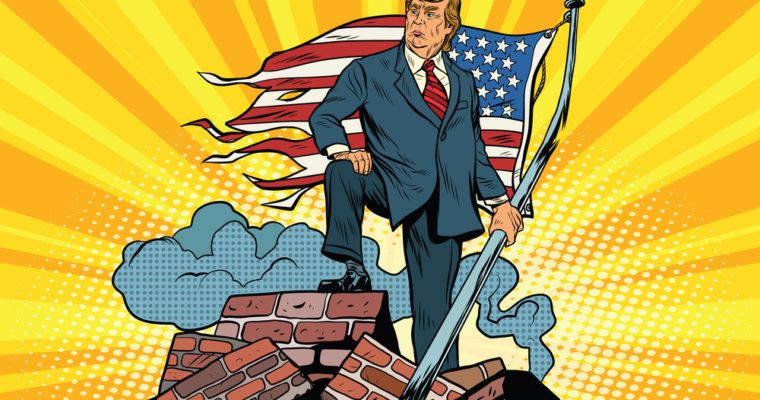 US President Donald Trump emerges from the government shutdown weaker than when it began. | Source: Shutterstock

The Trump administration reopened the government after a record 35 days, merely weeks after President Donald Trump heavily emphasized that the government would remain shut without funding for the border wall.

Reports suggest that three major factors led President Trump to the brink and to ultimately put an end to the longest shutdown in the U.S. government’s history.

Why the Government Shutdown is Difficult to Extend For Trump

Over the course of the past week, the U.S. government saw chaos throughout the country. Prison guards were driving Uber to pay for mortgages and food, air traffic control tower agents were taking sick leave to protest against the shutdown, and thousands of government employees signed up for food banks.

The situation at the country’s main airports including New York’s LaGuardia airport worsened to a point at which flights to the airport were delayed by the Federal Aviation Administration (FAA).

For President Trump, who often turns to the performance of the U.S. stock market and job growth to measure the success of his administration, the vulnerability of the U.S. economy presented serious short-term issues.

Speaking to the Washington Post, a White House official said that the administration acknowledged the necessity of a different solution and to end the government shutdown.

“Everyone who saw the floor action realized we were basically at the same place where we began and we needed a different solution,” the official said.

David Axelrod, a former White House adviser during the Obama administration, noted that the termination of the shutdown established a strong precedent for the rest of the Trump presidency, adding that the president would have to be more careful with his calculation.

He was the prisoner of his own impulse and it turned into a catastrophe for him. The House of Representatives has power and authority — and now a speaker who knows how to use it — so that has to become part of his calculation or he’ll get embarrassed again.

Lisa Murkowski, the Republican Senator from Alaska, issued a formal apology to the people and federal workers of the state.

She firmly stated that federal workers should not go through such an event ever again and that she aims to prevent the shutdown from occurring in the upcoming weeks.

I offer an apology to them, to those who have been impacted so directly by this shutdown, it should not have happened, and my goal is to make sure it doesn’t happen to you again.

My message to Alaskans and federal employees impacted by the recent partial government shutdown — I offer an apology to all those who have been impacted so directly. It should not have happened and my goal is that it never happens to you again. pic.twitter.com/hksBp6XxEo

In an interview with The New York Times, Senator Murkowski said that many Republican senators feel similarly about the shutdown and its impact on both federal workers and the U.S. economy in general.

Since January 3, the U.S. stock market has engaged in a strong corrective rally, almost fully recovering from the late 2018 correction.

Within three weeks, the Dow Jones increased from 22,686 points to 24,737 points, by more than nine percent.

However, the uncertainty surrounding a potential government shutdown in February and the geopolitical risks revolving around the U.S.-China trade talks could continue to pressure the U.S. stock market.

With the polls on a decline and the U.S. federal workers on edge, analysts remain concerned that a second U.S. government shutdown could materialize in three weeks given this week’s result.

Michael Steel, an aide to the former Republican House Speaker John Boehner, suggested that the lack of unified control in the Republican party prevented a compromise from being established.

“If you look back on the times when [Republicans] had unified control, and there was an opportunity to enact a compromise that would have protected some Dreamers while also expanding physical barriers at the border, that looks like a pretty good deal,” he said.