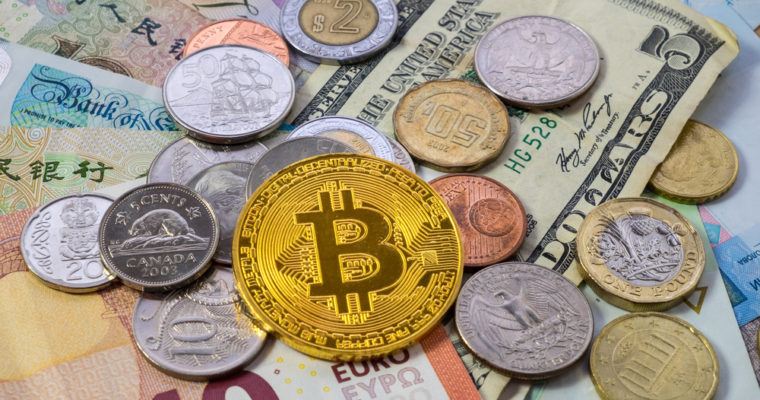 By CCN.com: There is a belief among some in the cryptosphere that a global recession or cataclysmic events are bound to imbue the populace with a sudden desire for cryptocurrencies.

To frame this accurately, we have to assess the various factors at play. In one respect, for larger monied interests, Bitcoin could certainly offer a hedge against inflation and decreased productivity. Trade imbalances that cause uncertainty in national economies might also be offset by profits gained from trading cryptocurrencies.

Bitcoin and gold are often viewed in the same light, and gold historically does better during recessions than most commodities. Still, there are sell-offs in between. If Bitcoin follows a similar pattern, then it certainly will come out of the next recession in better straits than it entered.

Yet one aspect of the equation that is conveniently left out is that of excess income. If people across industries see lower demand for their skills, the amount they’re earning is bound to drop. If earnings drop, excess money for investment and speculation also drops. The Bitcoin economy is now intimately intertwined with the traditional economy.

Bitcoin as a “store of value” cannot be seen as immune from a global recession. Even in nightmare scenarios where fiat is essentially worthless, there’s no guarantee that people are going to start accepting Bitcoin in lieu of said fiat.

The situation in Venezuela has been an interesting case study for cryptocurrencies. Million-percent inflation means that virtually anything is better than the Bolivar. But it is the better economic health of other countries that actually gives the crypto alternatives value.

If The Whole World Goes Down, Bitcoin Probably Does Too

If you subtract that from the equation, what worth can they really have in such situations? They’re just more cumbersome than barter, requiring education and other methods of normalization. Do people suffering from instability gain interest in high-volatility alternatives? Stablecoins may see a high-demand, but only as a means of acquiring foreign currencies with less friction.

While the author doesn’t advocate for planned economies, certainly western governments should use their resources more wisely. A ballooning debt has created a ticking time-bomb. A global recession is likely, however, to create interest in alternative economic models.

The deflationary model of many cryptocurrencies will have a new appeal. This notwithstanding, we need to delineate between a global recession and a global financial crisis.

Let’s imagine how it plays out. Suppose next week your dollar will only buy you 50% of the goods it would today. On the global Bitcoin market, that might drive a corresponding rise in the price of BTC/USD markets. Or it might not.

Of all the matters that people would be attending to, crypto trading would fall low on the list. Let’s say in this scenario you have 25 BTC, and let’s suppose you don’t see a corresponding doubling in the USD value of your crypto.

Let’s say you instead see a 25-60% gain in the value of your Bitcoin. Do you think you would be the only person to cash it out? No market spike goes like that. A tailspin effect would likely occur – people would sell off their crypto to pay for in-real-life needs. This would have no corresponding effect on the inflation rate. It’s much harder to go backward than forward in that department.

So now you’ve sold part or all of your BTC in an effort to secure yourself financially. Now your job doesn’t need you anymore, so your income goes to zero. That’s more of your devalued savings and crypto holdings diluted to pay for daily expenses. You eventually accept a job where you’re making less in both dollars and purchasing power than you were before. You’re in no position to re-acquire Bitcoin. Booming institutional and retail trading markets depend greatly on healthy economies.

If a global financial crisis hits again, the crypto-economy is simply not ready to subvert it entirely. There are dozens of aspects, from supply issues to merchant adoption, that we need significant progress on to say that we have a true alternative economy. What we do have are several pieces thereof, pieces which as a whole might take a decade or more to come together in anything that looks like unison.

A simple recession isn’t likely to drive the price of Bitcoin anywhere extreme. The inverse might be true. Anyway you slice it, we’re not dealing with great odds.

Much of the future of cryptocurrency is dependent on the development of the community. Necessarily, people entering the community must have some amount of money they’re actually willing to risk. Preferably, they won’t be people just looking to “get rich quick,” as the opposite reality is more common for people with that mentality.

For all the reasons that Bitcoin and cryptocurrency might do well in a global recession, there are plenty of scenarios in which it won’t. No one can argue against sound diversification, but if you’re looking to Bitcoin to rescue you from a failed state or economic nightmare, you might be looking in the wrong place.

Recession Isn’t ‘Good’ For Anything

In summation, a global recession probably won’t be macro-good for anything. Not even deflationary assets like Bitcoin.

The question of how Bitcoin will actually perform during the next massive recession depends on what we’re talking about. People will take a greater interest in cryptocurrencies. They may even shift assets into cryptocurrencies.

But if things get bad enough, it’s just hard to imagine a society of mass Bitcoin adoption. Are we really there yet? It’s hard to say.

Given the many thousands of people who have lost small fortunes in Bitcoin, it’s hard to argue that it is a safe-haven by any means. Poor economic conditions do create increased interest.

An increase large enough might create a situation where money enters the cryptosphere and does not leave it. Closed-loop crypto economies become possible. However, one drawback of having an Internet-based money is that there never really is a closing of the loop. Some portion of the market capitalization will always find its way to other shores. Whether it comes back is questionable.

For cryptos to actually gain the status of the most-desired money, several things need to fall in place. Things like merchant adoption, usability, and relative stability in the crypto markets.