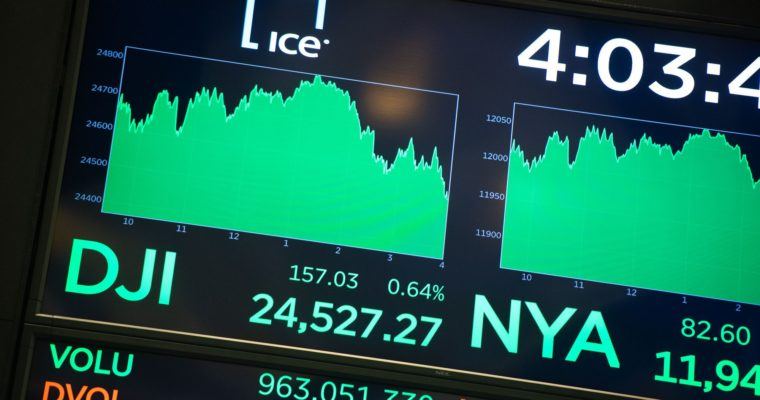 The Dow Jones Industrial Average turned bullish on Friday, but the same could not be said of the bitcoin price. | Source: Bryan R. Smith / AFP

By CCN.com: The bulls are back in town ahead of the US trading session, at least for one more day, and a buoyant Dow looks poised to leap nearly 150 points at the stock market’s opening bell. The mood is a bit more sour in the cryptocurrency market, where the bitcoin price is careening toward an uncomfortable milestone and could soon test its critical support level.

As of 8:43 am ET, Dow Jones Industrial Average futures had gained 202 points or 0.83 percent, implying an opening bell pop of 138.76 points. S&P 500 and Nasdaq futures also forecast upward swings, with the former up 0.82 percent and the latter flashing a full 1.11 percent gain.

On Thursday, the Dow closed in the red at 24,553.24 after creeping higher earlier in the trading session. The Nasdaq and S&P 500, on the other hand, consolidated gains of 0.68 percent and 0.14 percent, respectively.

Friday’s pre-market rally has been bolstered by a Wall Street Journal Report indicating that the US Federal Reserve may bring an early end to its balance sheet reduction, which began in Q4 2017 and has roiled the stock market ever since.

Traders also seem to be taking at face value US President Donald Trump’s claim that he would sign a bill to end the partial government shutdown if Senate Majority Leader Mitch McConnell (R-KY) and Senate Minority Leader Chuck Schumer (D-NY) could broker a “reasonable” compromise.

The key word, of course, is “reasonable,” which likely carries a very different meaning for Trump and congressional leaders. As recently as yesterday, the president tweeted that “We will not Cave!” on his demand for US-Mexico border wall funding.

Trump reportedly evaluates his economic policies primarily on how they affect the stock market, and right now his public statements suggest that he is very confident in the strength of the Dow and its peers.

Great earnings coming out of Stock Market. Too bad Media doesn’t devote much time to this!

“Great earnings coming out of Stock Market,” Trump tweeted on Thursday. “Too bad Media doesn’t devote much time to this!”

The crypto market, meanwhile, continues to stagnate as the bitcoin price teeters near an uncomfortable milestone. As CCN reported, the flagship cryptocurrency is just one week away from suffering its longest bear market in history.

On the daily charts, bitcoin deftly avoided allowing any bearish sentiment related to the CBOE’s withdrawal of its bitcoin ETF application to catalyze another major sell-off. However, the asset hasn’t attempted a significant push to the upside in a while, and daily trading volume has been on the decline.

At present, the bitcoin price is hovering above its interim support level at $3,500. Having already pierced that level before, bearish trader Mark Dow said that technical factors indicate that investors need to “GTFO.”

Mati Greenspan, a senior market analyst at eToro, said that bitcoin is giving another “serious test to the interim support level at $3,500.” If the cryptocurrency breaks below that line, he said, “we could see a move to critical support at $3,000.”

Should she break we could see a move to critical support at $3,000. 😬 pic.twitter.com/SXjCcqfMKx

Several technical analysts have argued that $3,000 could represent the bottom for the yearlong bitcoin price decline. With the cryptocurrency just days away from being in its longest-ever bear market, it appears that investors may soon find out whether that theory is correct.

As of the time of writing, the bitcoin price was trading at a global average of $3,576, which represented a 24-hour decline of 0.49 percent. Other major cryptocurrency assets were similarly stagnant, with bitcoin cash’s 1.66 percent decline proving to be the most volatile move in the large-cap index. The overall cryptocurrency market cap stood at $119.7 billion, about $700 million lower than on Thursday.