Deprecated: File class-phpmailer.php is deprecated since version 5.5.0! Use wp-includes/PHPMailer/PHPMailer.php instead. The PHPMailer class has been moved to wp-includes/PHPMailer subdirectory and now uses the PHPMailer\PHPMailer namespace. in /home/bitcpagi/public_html/wp-includes/functions.php on line 5574
 Billionaire Hedge Fund Mogul George Soros Warns That the US-China ‘Cold War’ Could Escalate Into a ‘Hot One’ - BitcoinAdsTrain
Skip to content 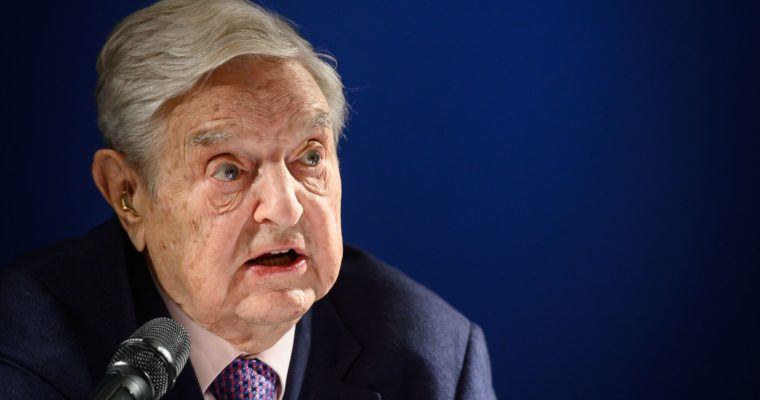 Hungarian-born US investor and philanthropist George Soros delivers a speech criticizing China and with a warning about the escalating US-China trade war on the sideline of the World Economic Forum (WEF) annual meeting, on January 24, 2019 in Davos, eastern Switzerland. . (Photo by Fabrice COFFRINI / AFP)

By CCN.com: Billionaire hedge funder George Soros has warned that the ‘cold war’ consuming the United States and China could get ugly.

Speaking in Davos, Switzerland on the sidelines of the World Economic Forum (WEF), the chairman of hedge fund Soros Fund Management said things could get nasty as the world’s two biggest economies stay locked in a trade war, according to CNBC:

The reality is that we are in a cold war that threatens to turn into a hot one.

Trade tensions between the two countries have raised concerns as investors begin to as worry that economic growth will suffer.

Earlier this month, a deal to end the trade tensions between the U.S. and China seemed plausible. Under the deal, China had reportedly offered to boost U.S. imports by over $1 trillion in a six-year period. This would effectively have served to cut the trade surplus to zero.

However, the U.S. Commerce Secretary Wilbur Ross later this week dashed hopes of such a deal ending the trade war. As CCN reported, Ross stated in a television interview that an agreement was far off:

We would like to make a deal but it has to be a deal that will work for both parties. We’re miles and miles from getting a resolution.

In the same speech delivered at the WEF 2019, Soros also questioned U.S. President Donald Trump’s strategy in handling China. The billionaire hedge funder pointed out that the approach was simplistic and must go beyond enacting tariffs on Chinese goods:

An effective policy towards China can’t be reduced to a slogan. It needs to be far more sophisticated, detailed and practical; and it must include an American economic response to the Belt and Road Initiative (BRI).

Proposed in 2013 by Chinese President Xi Jinping the BRI aims to build infrastructure linking China with 65 other countries by mainly road and rail. The initiative will traverse South East Asia and the EMEA region (Europe, Middle East and Africa).

Additionally, Soros also criticized Trump’s approach to China with regards to the U.S. policy meant to curb the authoritarian tendencies of the Chinese government:

Regrettably, President Trump seems to be following a different course: make concessions to China and declare victory while renewing his attacks on U.S. allies. This is liable to undermine the U.S. policy objective of curbing China’s abuses and excesses.

Soros also took the opportunity to launch attacks against President Jinping calling him the ‘most dangerous opponent of open societies’. Additionally, the philanthropist also warned that authoritarian regimes were using technology as tools of repression.

Instruments of control developed by artificial intelligence are giving authoritarian regimes an inherent advantage over open societies. China’s social credit system is the most pernicious example. A discussion from #WEF19 in Davos: https://t.co/e6LSZ0OLdE pic.twitter.com/COx5OkK0Pv

As a philanthropist, Soros is the founder of Open Society Foundations, an organization dedicated to building ‘vibrant and tolerant democracies’.