Deprecated: File class-phpmailer.php is deprecated since version 5.5.0! Use wp-includes/PHPMailer/PHPMailer.php instead. The PHPMailer class has been moved to wp-includes/PHPMailer subdirectory and now uses the PHPMailer\PHPMailer namespace. in /home/bitcpagi/public_html/wp-includes/functions.php on line 5574
 Facebook Has 1 Billion Fake Accounts, Mark Zuckerberg ‘Greatest Con Man in History’: Researcher - BitcoinAdsTrain
Skip to content 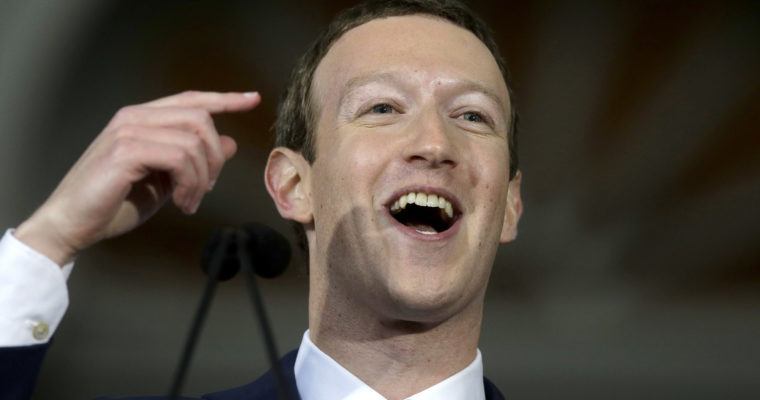 By CCN.com: Facebook is lying when it claims it has more than 2 billion monthly users around the world. That’s what tech entrepreneur Aaron Greenspan ― a former Harvard classmate of Facebook CEO Mark Zuckerberg ― alleges in a bombshell report.

“Facebook has been lying to the public about the scale of its problem with fake accounts, which likely exceed 50% of its network,” Greenspan posits in a damning 70-page research report entitled Reality Check.

“Its official metrics — many of which it has stopped reporting quarterly — are self-contradictory and even farcical.”

As a result of its artificial inflation of user statistics, Facebook is committing mass fraud by overcharging companies for the ads they place on the social media monopoly’s network, Greenspan claims.

The truth is that at this point, Mark Zuckerberg may in fact be the greatest con man in history, having pulled off a complex fraud at one point valued at approximately ten times the scale of convicted financier Bernard Madoff’s historic and epic Ponzi scheme.

Keep in mind that the larger Facebook’s user base is, the more money it can charge for ads.

Greenspan is the founder of a California-based software company called Think Computer, according to his website. He also runs a legal research website called PlainSite, which produced the report.

‘Billions of Dollars in Ill-Gotten Gains’

If, as we allege, Facebook is lying about its fake accounts, that means that it could be liable to its advertising customers for billions of dollars in ill-gotten gains — over and above what advertisers have already sued over.

Greenspan claims Facebook has been inflating its user account statistics since 2004. Moreover, he says its management is aware of this problem, but hasn’t done much to correct it.

This is how the fake-accounts scheme works, according to PlainSite:

Greenspan isn’t surprised by the alleged fraud Zuckerberg is committing, because all he cares about is expanding Facebook’s monopoly.

“Mark Zuckerberg has clarified over time that growth at any cost is his only priority,” Greenspan wrote. “Fake accounts have been keeping the company [afloat for years].”

Once the truth comes for the world to see, Greenspan believes the company’s future is in jeopardy. “It is increasingly likely that Facebook will go the way of AOL, CompuServe, and Prodigy — if legal liability doesn’t bankrupt it first,” he wrote.

Greenspan and Zuckerberg in Trademark Dispute

Greenspan has a checkered past with Mark Zuckerberg. The two attended college together at Harvard from 2002 to 2004. During his time at Harvard, Greenspan invented an online student portal called houseSystem that was supposedly the predecessor to Facebook.

In 2008, Greenspan’s software firm, Think Computer, filed a trademark complaint against Facebook. In 2009, Zuckerberg and Greenspan settled their dispute through a confidential settlement.

In a joint statement, Zuckerberg praised Greenspan for building the predecessor to Facebook. “I appreciate his hard work and innovation that led to building houseSystem, including the Universal Face Book feature. We are pleased that we’ve been able to amicably resolve our differences.”

For his part, Greenspan said: “I am glad that my contributions have been recognized by Facebook.”

Facebook has been under fire for the past year. Last week, CCN reported that the Federal Trade Commission is considering slapping the social media giant with a “record-setting” fine for its mass breach of user privacy.

The social media monopoly is accused of violating user privacy by selling their personal data to third parties without their consent for years.

Facebook May Be Slapped with ‘Record-Setting’ FTC Fine for Data Breach Scandal https://t.co/CiPrhZHJ3U

In doing so, Facebook may have violated a 2011 consent decree under which it agreed to get user permission before sharing their data with third parties.

Many users were furious when they learned that the company had been secretly selling their personal data to third parties without their consent.

There has also been fallout in Crypto World. As CCN reported, Facebook is aggressively trying to expand its blockchain group.

However, the embattled company has been having trouble recruiting top talent because its reputation has been heavily damaged by the data-breach scandals.

CCN has reached out to Facebook for comment and will update this article upon receiving a reply.