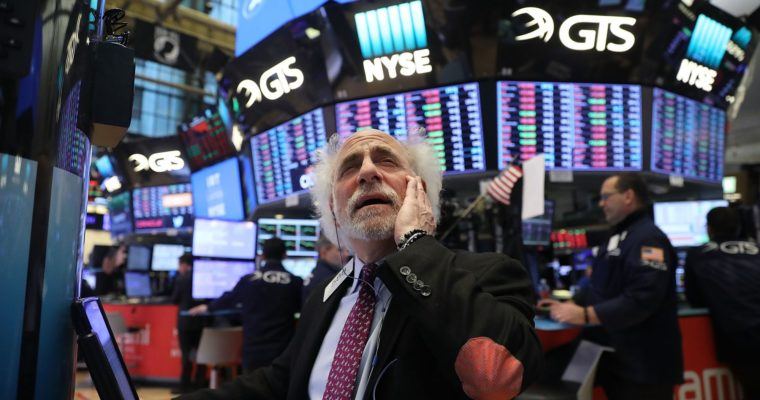 The Dow crept higher on Thursday, while the bitcoin price held firm in the face of bearish ETF news. | Source: Spencer Platt/Getty Images/AFP

By CCN.com: Neither the Dow Jones nor the bitcoin price looks poised to make a bold movement on Thursday, as both the traditional financial and cryptocurrency markets eye cautious entries into the US trading session.

Dow Inches up as US Stock Market Traders Remain Cautious

For the US stock market, unpredictable earnings season results continue to lurk on the horizon, leaving futures traders with little enthusiasm ahead of the market open.

As of 8:39 am ET, Dow Jones Industrial Average futures had climbed 33 points or 0.13 percent, implying a gain of 36.38 points at the opening bell. S&P 500 futures gained 0.19 percent, and Nasdaq futures rose 0.51 percent to outperform its sister indices.

Wednesday’s trading session had been incredibly volatile. Dow futures rose as much as 200 points before the opening bell, but the index later slipped into negative territory. By market close, however, the Dow had pounded back to a 171.14 point or 0.70 percent gain, ending the session at 24,575.62. The S&P 500 and Nasdaq lagged the Dow, but both managed to finish the day in the green with advances of 0.22 percent and 0.08 percent, respectively.

Today, corporate America will serve up a king-size buffet of earnings reports, and Wall Street will closely monitor the Q4 performance of top-tier firms such as Bristol-Myers Squibb, Discover Financial, Intel, and Western Digital.

Several airlines will also be delivering their earnings reports, and one can expect that American Airlines Group, Southwest Air, and Alaska Air will all address the impact of the ongoing US partial government shutdown, which began in late December but has extended into the final days of January.

The government shutdown is now entering its 34th day, and the US Senate is preparing to vote on two bills that would fund the government, at least temporarily. However, Democrats and Republicans remain at an impasse, so neither bill is expected to clear Congress, much less receive a signature from President Donald Trump.

Speaking in an interview with CNBC in Davos on Thursday, Morgan Stanley CEO James Gorman said that the shutdown would have an “extremely damaging effect” on the US economy if it continues much longer.

Unfortunately, that could be what it takes to end the gridlock. As CCN reported, people close to Donald Trump say that he takes his policy cues from the stock market. When the Dow and its peers are booming, he remains confident in the course on which he is steering the executive branch of the government. When market returns begin to lag, he is more likely to question whether it’s time for a strategy shift.

For now, at least, stocks remain in the green for 2019, and the shutdown continues.

Bitcoin Price Holds Firm Despite ETF Withdrawal — Is the Bottom in?

Another day, another failed bitcoin ETF bid. That’s the storyline for the already-battered cryptocurrency market now that US stock exchange operator CBOE has withdrawn its application to list the VanEck SolidX Bitcoin Trust on one of its trading platforms.

According to VanEck (see video starting at 10:45), CBOE withdrew the application because the prolonged government shutdown made it highly unlikely that the US Securities and Exchange Commission (SEC) would have ample time to grow comfortable with the product before the determination deadline in late February.

We are actively working with regulators and major market participants to build appropriate market structure frameworks for a Bitcoin ETF and digital assets in general.

But while the application will be re-filed, the sluggish pace at which the wheels of government turn makes it a virtual certainty that the SEC will not approve a bitcoin ETF in 2019, as many cryptocurrency bulls had hoped.

There’s no way to skew this as a positive development for the cryptocurrency industry, but there is a silver lining. In the past, the news that bitcoin ETF bids had failed — even ones that most analysts said had little chance of approval — would inevitably spark a significant sell-off. However, aside from a minor dip immediately after the announcement, the bitcoin price proved resilient throughout the duration of Wednesday and heading into Thursday morning.

“The markets lackadaisical response to this news is a clear sign that investors are starting to understand,” wrote Mati Greenspan, a senior market analyst at eToro, in daily market commentary made available to CCN. “The crypto market is not dependent on any government or financial institution and no single product or service has the power to make or break bitcoin. We call this maturity.”

Has the Crypto Market Finally Bottomed?

One could argue that the application’s failure was already priced into the market, but given how heavy the bitcoin price has felt over the past month, it would not have been surprising to see the news met by another wave of sell orders.

That the bitcoin price held firm could strengthen the case that the flagship cryptocurrency has established a bottom in the ~$3,000 region and might soon begin another long grind upwards.

As of the time of writing, the bitcoin price traded at a global average of $3,601, down 0.28 percent from its previous-day level. Movements throughout the large-cap cryptocurrency index were similarly-muted, with no top-10 token breaking more than 1.88 percent from where it traded at this time on Wednesday. The aggregate cryptocurrency market cap continues to trade above $120 billion, with a single-day decline of around $500 million.