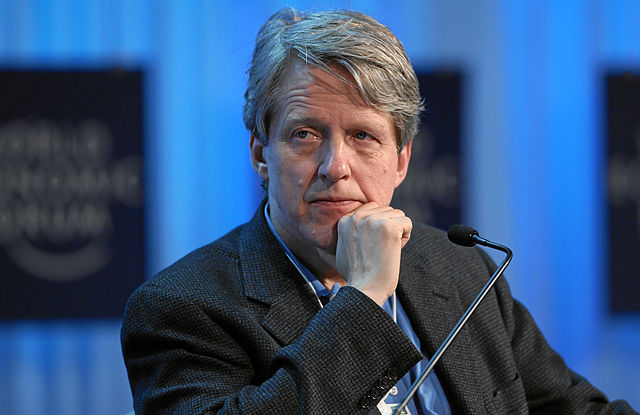 Robert Shiller warned that the US stock market could be on the verge of a recession. | Source: Flickr/World Economic Forum.

By CCN.com: The US stock market could fall prey to deflation and tumble into a full-blown bear market in 2019. That’s what Yale University professor Robert Shiller, a Nobel Prize-winning economist, said at the 2019 World Economic Forum in Davos, Switzerland.

Shiller says the Dow Jones has been recovering from its plunge in late-2018, but there’s still a risk of a major downturn ahead.

“I’m not confident of my ability to predict, but I think there’s a risk (of a bear market in 2019),” Shiller told CNBC on Jan. 23 (video below). “I categorize risks in terms of ‘narratives.’ And this bear-market narrative has taken a strong hold.”

There is a feeling that the stock market might be due for some deflating now because it’s been a long time. We’ve seen some hints of it. And we haven’t seen the real deflation yet.

Shiller ― who won the Nobel Prize for economics in 2013 ― is famous for his work in spotting financial bubbles. He underscored that his bearish outlook is based on psychology and media “narratives” ― and is not based on market fundamentals.

I have this quarrel with economists about fundamentals. I’m writing a book on ‘narrative economics,’ and think it is stories that drive markets more than fundamentals.

So basically, Shiller is predicting a bear market while writing a book about how “bear-market narratives” can actually trigger them.

El-Erian: Let’s Not Talk Ourselves into a Recession

Robert Shiller is echoing the sentiments of other noted economists. They warn that recessions and bear markets can become self-fulfilling prophecies.

Since these other economists have real-world experience with money and aren’t academics who only traffic in theory, one could argue that their assessments might be more reliable.

For example, Mohamed El-Erian — the chief economic adviser at German mega-bank Allianz — warned that the media hysteria about a recession could actually trigger one.

“I’m stunned by all this talk of recession,” El-Erian told CNBC in December 2018 (video below).

We’ve got to be careful because we can talk ourselves into a recession. That’s how bad technicals become bad economics.

Mohamed El-Erian said the stock market would remain volatile in 2019 due to financial uncertainty in Europe and China, but there’s no real concern that the United States will tumble into a recession.

“[A recession is] certainly not becoming a reality,” El-Erian said. “The global economy has become more uncertain — not because of the US, because the US is doing fine — but because of Europe and China.”

“There is no recession imminent — I think five more years is what we are talking about,” Krishna said.

JPMorgan CEO Jamie Dimon also says a global recession is not coming, so everyone needs to “take a deep breath” and calm down.

“It looks to me like a slowdown [not a recession],” Dimon said. “The United States is still growing, at 2.5%…People [should] take a deep breath.”