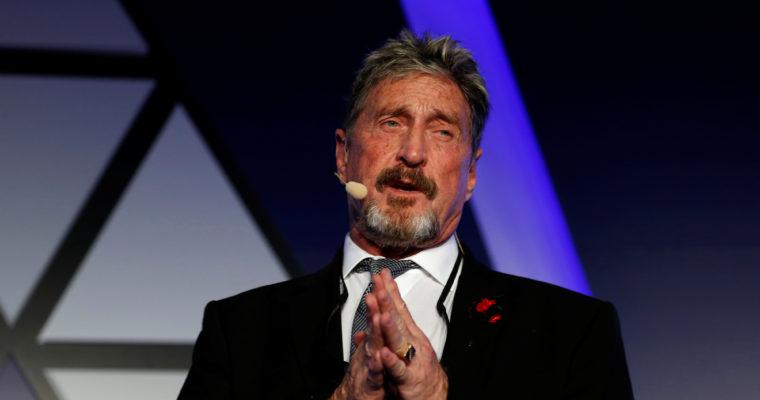 By CCN.com: John McAfee announced Tuesday afternoon in a video tweet that he and his wife have been indicted by a grand jury in Tennessee on federal, felony charges related to what McAfee acknowledges in the video are eight years of delinquent U.S. federal income taxes to the IRS.

The McAfee 2020 Campaign is, as of this day, in exile. I am being charged with using Crypto Cuttencies in criminal acts against the U. S. Government. More videos coming shortly. Stay tuned. pic.twitter.com/C75zcbnKTD

For two years I’ve been speaking at conferences around the world and writing, and making videos about the fact that cryptocurrency will at some point come head to head with governments.

And I’ve always said this is a good thing. And I’ve said we will at some point be at war. We are today at war.

John McAfee Could Be Lying or Exaggerating

Remember that McAfee is very blustery so there’s a real non-zero chance there are no charges, and that McAfee – a loose cannon and notorious publicity hound who is running for president in 2020 as he did in 2016, and has an upcoming movie (in which he’ll be played by Michael Keaton) – might be playing up whatever he’s going through or fabricating it completely.

An anti-government, crypto-anarchist millionaire who made his millions from anti-virus software in the 1990s and was an early investor in cryptocurrency, John McAfee filmed his video announcement about the tax evasion charges from a boat with two U.S. flags ironically flowing in the breeze behind him as he explained the charges he and his wife face for tax evasion.

But He Could Very Well Be Telling The Truth

McAfee says something in the video that wouldn’t be hard for anyone to believe:

I have not paid taxes for eight years. I’ve made no secret of it. I have not filed returns. Every year I tell the IRS I’m not filing returns. I have no intention of doing so. Come and find me. It’s not illegal.

Income tax protestors like John McAfee believe that taxation is theft because governments get their tax money by criminalizing non-payment and treating people who don’t pay their taxes exactly the way they would treat a violent criminal.

The U.S. federal government has gone as far as imprisoning income tax protestors like John McAfee before, perhaps most notoriously, the late Irwin Schiff.

Irwin was the father of legendary libertarian hedge fund manager, Peter Schiff (who’s famously bearish on U.S. stocks and Bitcoin, and always bullish on precious metals and foreign equities). The elder Mr. Schiff died at the age of 87 in federal prison for refusal to pay his income tax.

It is true that we as a society don’t permit any other organization to get money from other people that way. Every other individual and organization on earth is expected to play by a different set of rules to acquire money than we permit governments to play by.

Private organizations and individuals have to persuade others with enticements to voluntarily consent to giving up some of their money in exchange for something that they agree is of greater value to them. But governments get their money by threats to ruin someone’s life if they don’t pay.

In the opinion of tax protestors like John McAfee and Irwin Schiff, people in the near future will consider taxation to be as barbaric a way for any organization to acquire resources from other human beings as it is fundamentally unfair.

John McAfee: ” I am running my campaign in exile.”

Today, January 22nd, the IRS has convened a grand jury in the state of Tennessee to charge myself, my wife Mrs. McAfee, four of my campaign workers, with unspecified IRS crimes of a felonious nature. Now they want to silence me.

I will not allow that. I am running my campaign in exile on this boat for the duration. I will not allow them to imprison me and shut my voice down, which they will do immediately. Why? I am a flight risk. Obviously, I am in flight.

I will be putting videos out every day. Today. Many. To explain to you what has happened. Today crypto community, we are at war. And I am on the front lines. And I’ll be saying more later.”