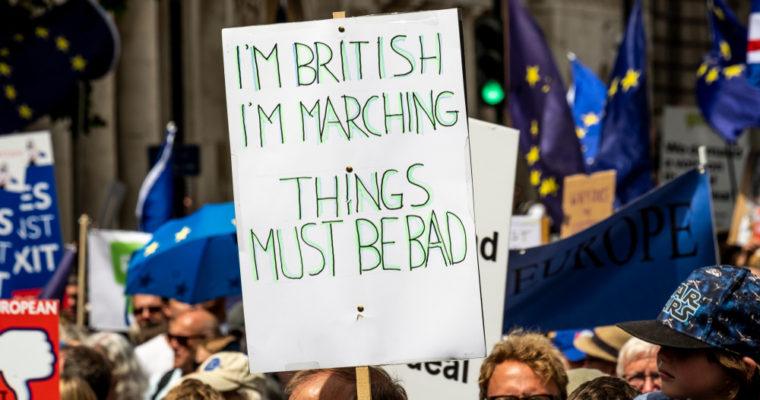 By CCN.com: Thursday, June 23, 2016. The day that 48% of the British public realized they no longer knew their neighbors. When the dust settled, the stench of defeat lingered in the air. The majority had spoken. And it turned out that the rest of us didn’t like what the xenophobic, nationalistic mob had to say.

For many of us, the ceilings fell in on our worlds. The days and weeks that followed were hard to bear as we grappled to accept what had happened. And we waited to find out what Brexit actually, really meant.

Little did we know that two-and-a-half years later, not a single person inside the party or out would still be physically capable of explaining its implications.

As Theresa May prepares to present “plan B” to the Commons this afternoon after losing the first deal proposal by epic proportions, just like a bad horror movie, one has to wish it would all be over.

“Overwhelmingly, the British people just want us to get on with delivering Brexit.”

Were the words delivered by a noticeably haggard Theresa May on the steps of Number 10 after narrowly winning the second no-confidence vote in the space of a few short weeks.

The Vortex of Brexit Uncertainty

Uncertainty is the enemy of business. After all, who will plow funds into business in a country with no clear regulation in sight, and a government in chaos? While much of the crypto space has been calling on clear regulation for some time, Britain’s Brexit has far more at stake.

Brexit, like crypto, caught the eyes of the media all around the world as the news transcended the public conscience. It was shocking, unbelievable, unbearable, and utterly unavoidable. Until it became obvious that not even those in power had any notion of how to move it forward.

People grew bored of the never-ending talks that seemed to lead to nowhere. No plans came to fruition, no working use cases–rather like blockchain, in fact.

According to the SFOX report on cryptos in 2018, public interest dwindled over the year until the last couple of months when volatility picked up.

Brexit, too, began to fall out of the news until the run-up to the most unpopular government proposal in living history. And a veritable cast of actors putting on Oscar-winning performances crying out “order, order,” in a range of vocal tones to give Mariah Carey a run for her money, as the House descended into unruly chaos.

How to maintain order during a Brexit vote in the House of Commons like Speaker John Bercow. #TheMoment pic.twitter.com/H2lYjMLG0H

Business Confidence at an All Time Low

The end date is looming, no deal is in sight, and Theresa May clings desperately to a “plan B” to win over a divided house.

Meanwhile, amid the theatrics, the economic uncertainty is killing business in the UK.

While the pound remained reasonably stable upon the news of the rejected deal (after all, it did not come as a surprise), and May survived a second motion of no confidence (albeit narrowly this time), small business confidence in the UK is unsurprisingly at a seven-year low.

Businesses are pleading, begging, screaming even to know how to proceed, as the country’s leaders put them through the pain of back-and-forth talks, and political purgatory like undergoing a hair wax in slow motion.

And while the terms remain two-and-a-half years later as unclear as they were the day the vote was cast, banks are stepping up their plans to leave the chilly Isle.

All the major banks, in fact, are busying about their plans to set up subsidiaries across the bloc to ensure they can still serve clients if Britain crashes out of the EU.

Citigroup is heading to Frankfurt, Bank of America will be making Dublin its main EU base, HSBC is moving to Paris, and even British bank Barclays will be shifting 200 roles to the continent as part of its Brexit planning.

Some business owners are even predicting a Brexit apocalypse now that a “no deal” is looking ever more likely.

If you’re old enough to remember the period before the year 2000 with the Y2K Bug, where analysts predicted that planes would fall out of the sky and there would be a global shutdown in communications, the Brexit catastrophy is remarkably similar.

If the UK crashes out with no deal, the storm crows are warning of chaos at ports and airports, as well as catastrophic job losses. Deutsche Bank’s CEO even predicts at least a two-year recession that will affect economic output for the remainder of the EU.

According to a source at the port of Dover, Jens Bjorn, the imposition of customs checks on every truck coming in from over the Channel could cause tailbacks of 130 kilometers.

Companies are doing their best to prepare for the worst-case scenario, but they’ve reached a point where they just want to know now. All hope for the best has drained away and the agony of waiting is excruciating.

Logistics giant Deutsche Post opened an office in Southampton with 450 customs specialists on board to advise clients in the event of a no-deal Brexit. The company has reportedly spent a year planning for the worst, but can’t put these plans into motion in the current state of uncertainty.

Supermarkets, banks, healthcare, retail… just about every industry in Britain will be affected by a soft Brexit, a hard Brexit, a no deal Brexit, Brexit with bacon and eggs… or even no Brexit at all.

Whatever the outcome of this slow-motion train wreck, just rip the damn bandaid off.