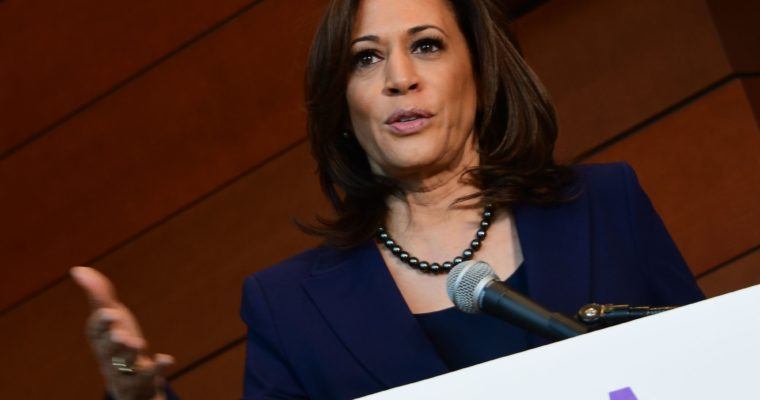 US Senator from California, Kamala Harris, addresses the media January, 21 2019 at Howard University in Washington, DC after announcing earlier in the day that she is seeking to become the first African American woman to hold the office of US president. (Photo by EVA HAMBACH / AFP)

U.S. Senator Kamala Harris (D-CA) announced Monday that she would be seeking the Democratic Party’s nomination to run for president in 2020. She timed her announcement for Martin Luther King Jr. Day, a sign that she intends to make political capital of her identity as a woman of color.

That’s ironic because Martin Luther King Jr.’s dream from the famous speech itself was:

“I have a dream that my four little children will one day live in a nation where they will not be judged by the color of their skin but by the content of their character.”

Of course, Kamala Harris is hoping, like Hillary Clinton and many of her supporters in 2016 were, that voters will embrace identity politics and see voting for a woman or a black person as inherently progressive regardless of whether their actual career accomplishments and political platform actually evinces progressive policies. Many voters will.

Electing a black woman to be “The Man” is an impoverished notion of progress.

Hillary Clinton Was Dick Cheney in a Pantsuit

But this mentality is a major reason why Hillary Clinton’s presidential campaign crashed and burned so spectacularly in 2016. The fact that she was the most viable female candidate for the U.S. presidency in history was irresistibly tantalizing to many in the Democratic Party, which shows you how shallow and superficial their level of political thinking is.

Any Democrat in 2015 or 2016 who could bring themselves to set aside their fixation with Hillary Clinton’s Fallopian tubes for ten minutes to make a sober examination of her record as a New York Senator and Secretary of State, would have found that everything they hated about George W. Bush or Dick Cheney was true about Clinton too.

She was an inveterate warmonger who voted for Bush’s 2003 invasion of Iraq.

How’s this for a ten-year challenge meme––

Yeah, I bet she did regret it, but not because of all the death and destruction, and murder and mayhem, the environmental damage and the destruction of $2.4 trillion in American wealth.

No, she regretted it by 2016 because it might have stood in the way of her personal ambition for more power, prestige, and ill-gotten gains. If she had actually regretted all the human death and suffering she helped cause, then she would not have been the most vociferous proponent of regime change in Libya in 2011.

Since 2001 she and her husband made $153 million in fees for private speeches to big companies and organizations, including, “at least $1.8 million for at least eight speeches to big banks,” like Goldman Sachs and UBS. Folks this is called corruption.

So what is the content of Kamala Harris’ character?

I think roving journalist Michael Tracy said it best in a tweet Monday:

“Prior to entering the Senate two years ago, Kamala Harris’s entire professional life and political identity was centered around being a zealous prosecutor, i.e. throwing lots of people in jail. And somehow that’s going to get spun as Very Progressive™ — should be entertaining.”

Before she was elected to the U.S. Senate in California in 2016, Kamala Harris made a name for herself as the attorney general of San Francisco by increasing the felony conviction rate to record highs. That includes non-violent crimes like selling drugs, for which Harris increased the conviction rate from 56% in 2003 to 74% in 2006.

Donald Trump has already said he would probably sign a bill to legalize marijuana at the federal level. What is Kamala Harris going to do in the campaign against Donald Trump when there is a groundswell of support for legalizing marijuana nationwide, and Donald Trump supports it, but Kamala Harris made a name for herself and profited by locking up people who sold it?

By the time Harris was California Attorney General, she had helped put so many people in confinement that the U.S. Supreme Court actually ruled in a 2011 case (Brown v. Plata) that California’s prisons were so overcrowded that the resulting horrendous conditions amounted to cruel and unusual punishment in violation of the Bill of Rights.

Throughout 2018 the only thing Donald Trump could manage to receive praise from the Democrats for (and he received a lot of praise from Democrats and progressives for this) was signing one of the most comprehensive prison reform bills in history to reduce sentences.

It would be another fatal blunder for Democrats to nominate someone to run against Trump whose greatest success in life other than marketing herself to the political donor class and voters, has been feeding people to the prison industrial complex in California.

Electing a uterus or some extra skin melanin to pull the levers of a machine that hurts and oppresses people is an impoverished conception of progress.