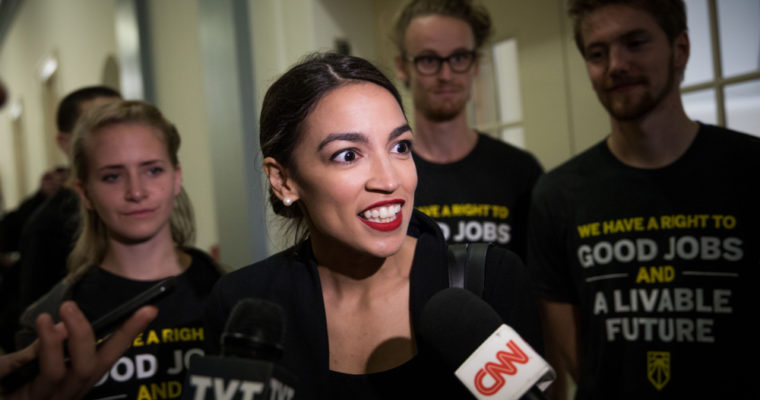 Wall Street should be concerned about the rise of Rep. Alexandria Ocasio-Cortez as a political force. | Source: Shutterstock

By CCN.com: Horizon Investments Chief Global Strategist Greg Valliere has described congressional rookie Rep. Alexandria Ocasio-Cortez (D-NY) as a very real concern for the stock market because of her perceived willingness to put the financial industry’s nose to the grindstone as part of her political strategy.

Horizon Investments: Watch Out for Ocasio-Cortez

Speaking to Yahoo Finance on Wednesday, Valliere stated that markets should be worried because, in addition to her tax increase agenda, Ocasio-Cortez is also likely to lean on the power of the House to summon financial industry executives as often as may be deemed fit.

From her campaign through to her swearing-in less than two weeks ago, Ocasio-Cortez has become something of a polarizing figure, celebrated and reviled in equal measure by the left and right halves of the American political spectrum because of her perceived socialist tendencies, among other things. Her use of social media as a primary means of communication has even been likened by some to President Donald Trump, but it is not this that has Valliere worried.

Financial Services is one of just four exclusive committees in the House. It oversees big banks, lending, & the financial sector.

I am very grateful for the opportunity to sit on this committee as a freshman, and look forward to working under the leadership of @RepMaxineWaters! https://t.co/kIq5iDcrTV

According to Valliere, there is little risk of Ocasio-Cortez and the other members of the House Financial Services Committee pushing through additional legislation aimed at regulating the financial sector further. What she does have that worries him, he said, is the power to summon industry executives pretty much at will using subpoenas. In his view, she can use this as a tool to “make life miserable for industry execs with endless hearings.”

Valliere also pointed to her well-publicized tax agenda including a proposed 70 percent top tax rate for any income earned over $10 million. This, in particular, has been a sticking point with conservative commentators because a recent poll showed that a majority of Americans are actually in support of the idea. What this would mean is that there is a real risk that the tax cuts championed by Donald Trump may be reversed — possibly before the end of his first term — if Ocasio-Cortez and her allies are successful.

This, Valliere said, is worrisome because it would add to the federal deficit, which is already projected to hit $1 trillion this year. On her own, he says, she is not an immediate threat to markets, but what she represents will increasingly become a risk factor for analysts.

Summing up his thoughts on the congresswoman, he said:

The seeming rejection of capitalism by young people is something to take very seriously. […] The era of tax reductions is over; the challenge for conservatives is to simply keep the existing Trump tax cuts in place during the next decade. […] As for Ocasio-Cortez, she’s a brash New Yorker, skilled at self-promotion, with a modest understanding of how government works – and a passionate base of supporters. Sound familiar?