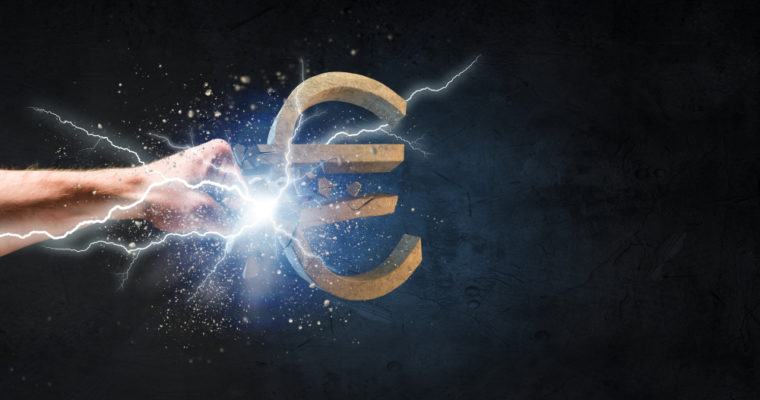 By CCN.com: As the eurozone economy slows down and the European Central Bank (ECB) run out of ways to fuel the market, market strategist Russell Napier has said the euro may be in trouble.

Speaking to FT, the analyst firmly stated that the global monetary system is beginning to show serious vulnerabilities, noting that the demise of the euro may trigger the collapse of the existing financial system.

Why are Analysts Worried About the Euro?

Many major regions within the eurozone including the likes of Germany, France, and Italy have struggled to deal with a declining rate of overall growth and the weakening performance of large financial institutions.

The key consequence of this collapse will be the destruction of the euro. The expected success of the far-right and far-left in the European parliamentary election in May this year augurs the beginning of the end for the currency union. Both extremes share a commitment to the return of sovereignty to their parliaments that is incompatible with a single currency

According to Napier, the likely approach of the ECB and the EU authorities to impose strict capital controls in the short-term may pose a negative effect on the long-term performance of the euro.

While tightened capital controls and the restriction on both individuals and businesses to send the euro outside of the eurozone may prevent the devaluation of the euro in the foreseeable future, it could also cause domestic companies to suffer.

Local companies with diversified portfolios or plans to expand outside of the eurozone are likely to run into difficulties and the inflow of capital from the U.S. and Asia into the European market could decrease.

Earlier this week, a report from The Economist revealed that Germany narrowly prevented a full-blown recession in 2018 with no signs of growth in the last quarter of 2018.

But, with the ECB struggling to find tools to stimulate the eurozone economy and domestic firms seeing weakness in many areas, the European economy could experience a gradual decline over the long run.

It’s not country- or sector-specific anymore. The weakness is widespread.

What Will the Demise of the Euro Cause?

Whether the UK exists the European Union (EU) with a comprehensive Brexit deal or not, in an event in which the euro loses most of its momentum and the eurozone economy declines substantially in the next few years, the UK market could appeal to investors as a potentially safe haven.

“The UK, where democracy and the rule of law will remain largely unchallenged, will become an attractive safe-haven investment for European investors facing increasingly authoritarian regimes and property sequestration on the mainland,”

Throughout the past few weeks, the euro has demonstrated losses against both the Canadian dollar and the U.S. dollar, leading traders to fear for the short-term trend of the currency.