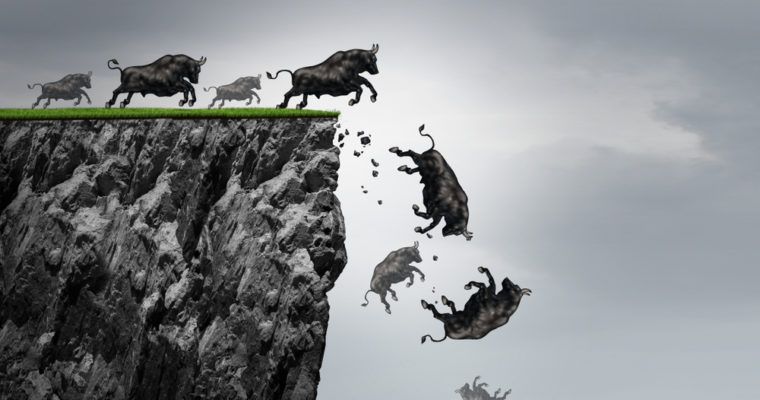 The bulls seem to be prevailing in early 2019, but is the stock market headed for a cliff? | Source: Shutterstock

Amidst the ongoing stock market rally characterized by bullish sentiments from several prominent investors, BMO analyst Russ Visch has warned that the fundamentals are still not good enough to justify much optimism. Earlier, CCN reported that Blackstone chief strategist Joseph Ziddle predicted that the S&P 500 would embark on a 15 percent rally in 2019, taking it to a new all-time high in excess of 3,000 points by the end of the year.

Stock Market Running Off a Cliff

While markets have appeared to respond favorably to U.S. president Donald Trump’s recommendation to buy, Visch believes that the market is locked in a temporary feedback loop of optimism which cannot be sustained for much longer. According to him, the S&P 500’s 12 percent jump after a miserable end of year period is a manifestation of a “Wile E. Coyote” effect where the market accustomed to long term bullishness exhibits a significant delay in responding to bearish fundamentals.

Despite being regarded as one of the best indices with which to measure American economic performance, the S&P 500’s rise is not enough to convince Visch that the bearish fundamentals from December have actually gone away. He warns that “things are not that great,” especially since analysis of the New York Stock Exchange over the past week shows that it has a practically flat breadth, which means that there is no distinctly visible uptrend. In addition, he also points out abnormally low stock market volume as a cause for concern.

We like to use the analogy of Wile E. Coyote running off a cliff and not knowing there’s no ground underneath him anymore quite a bit, and that’s what the latest action in the major averages feels like to us right now. i.e. – sooner or later the deterioration underneath the surface is going to bite.

Bloomberg Markets commentator Ye Xi also agrees with Visch’s position, stating that he believes that it will be difficult for the stock market to maintain any sort of bullish momentum in the coming days. Referencing the Value Line Investment Survey, Xie stated:

It is approaching a dicey level which repeatedly marked previous market peaks, after falling below it during the current rout.

Earlier in the week, CCN reported that National Securities Managing Director and Chief Market Strategist Art Hogan slashed his S&P 500 forecast for 2019 from 3,250 to 2,850, citing persistent uncertainty in the stock market caused by the U.S.-China trade war and the ongoing government shutdown which has entered a fourth week.