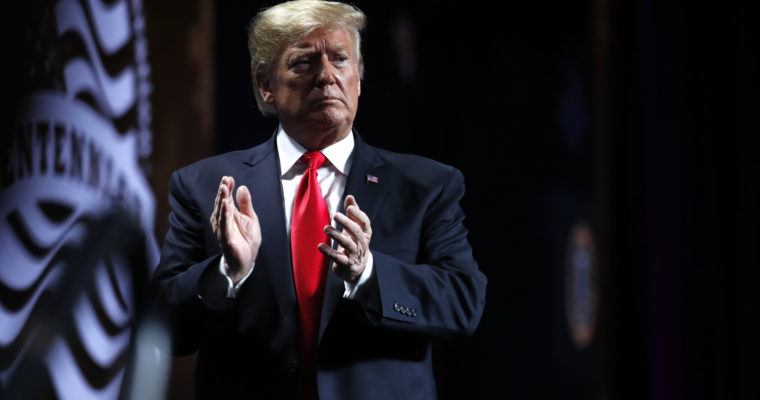 People close to President Donald Trump say he won’t feel pressure to end the government shutdown as long as the Dow and its peers continue to boom. | Source: AP Photo/Jacquelyn Martin

With the US partial government shutdown now entering its 27th day, this funding standoff is already the longest in federal history. Nevertheless, President Donald Trump has expressed no qualms about extending the shutdown for a “long time” if Democrats refuse to budge on border wall funding. According to sources close to the president, that may have something to do with the strong performances that the Dow and other stock market indices have recorded amidst the shutdown.

That illuminating theory comes courtesy of Politico, which reports that Trump — more than previous presidents — judges his policies based on immediate stock market feedback.

Per the article, which was drafted by Ben White, Trump “tends to gauge economic risks by market reaction, so the lack of any big drops on Wall Street could be among the reasons he does not yet feel significant pressure to change his wall demands in ways that could end the shutdown.”

Indeed, US stocks have made wild recoveries since the government shutdown began on Dec. 22. On Friday, Dec. 21, the Dow closed at 22,445.37, knee deep in a pullback and on the verge officially entering a bear market.

Mainstream media outlets, which tend to lean left and assign more blame to Trump than congressional Democrats for the shutdown, have focused their coverage on its tangible effects: federal workers missing paychecks, longer lines at TSA airport checkpoints, and national park closures.

However, if White’s sources are correct, then reports like these probably aren’t going to change the president’s commitment to exercising his veto power to twist the arms of Democrats into allocating him his desired $5.7 billion in border wall funding — which, politics aside, is a drop in the bucket of federal spending. Rather, Trump is likely paying more attention to the stock tickers on his favorite TV channels than he is to New York Times features designed to tug at readers’ heartstrings.

This being the case, it may be that the stock market would have to see a stark reversal — a pullback on par with the one seen in Q4 last year — for Trump to start having second thoughts about his shutdown stance. Of course, even then Trump might not accept responsibility for the correction.

Throughout last quarter and into 2019, the president has been sharply critical of the Federal Reserve’s recent interest rate hikes. Trump blamed those rate hikes for putting the brakes on a what had been a booming economy. Fed Chair Jerome Powell has indicated that the bank intends to take stock market conditions into consideration when mulling future rate increases, but that doesn’t mean that Trump won’t blame him — or someone else — if the Dow crawls back further into correction territory.

Regardless, a stock market reversal could tip the scales in the Democrats’ favor, making it more likely that Trump will feel pressure to cut a deal — or at least take the escape hatch of declaring a national emergency.

In the present, though, it seems that the US must choose between a strong economy and a fully-funded federal government.