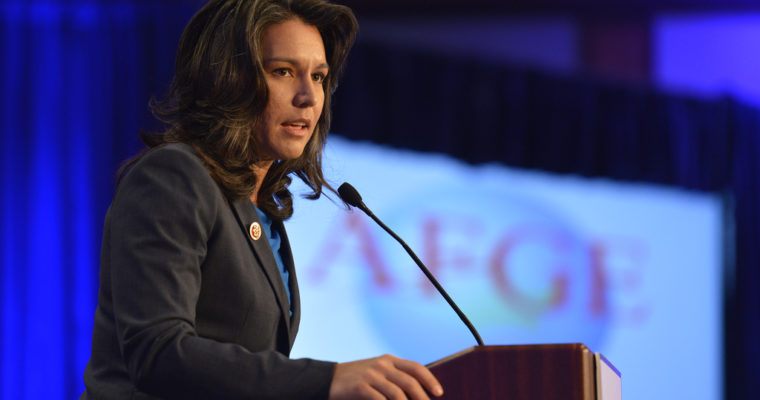 US Congresswoman Tulsi Gabbard of Hawaii is running for president of the United States in 2020. In December 2017, Gabbard bought Litecoin and Ether at the height of the crypto bull market, according to federal filings.

“I have decided to run and will be making a formal announcement within the next week,” Gabbard tells CNN on Jan. 12 (see video below).

“There are a lot of challenges that are facing the American people…that I want to help solve.”

Gabbard: US Must Stay out of Mideast Wars

Gabbard says her main concern is to make sure that the US does not continue to intervene in ongoing conflicts in the Middle East.

Her other priorities include climate change, health care, and criminal justice reform.

There is one main issue that is central to the rest, and that is the issue of war and peace.

Gabbard, 37, is a fresh, energetic face on the American political scene. However, her chances of winning the Democrat Party’s nomination are slim, given the huge field of candidates.

For example, Senator Elizabeth Warren of Massachusetts is also running for president. Warren is a crypto critic who says the virtual currency market is full of scam artists.

It’s unclear how much crypto Gabbard currently holds. However, it’s likely that she lost some money on her investments amid the ongoing bear market.

Other US lawmakers who invested in crypto include Republican Bob Goodlatte, a 13-term Congressman from Virginia.

Lobbyists Are Pushing Crypto in Washington

A week after the group launched, the Congressional Blockchain Caucus introduced three laws to promote digital currencies and blockchain in the United States.

The Congressional Blockchain Caucus urged US lawmakers to support blockchain and crypto. They say the disruptive technologies could revolutionize banking, supply-chain management, and healthcare.

In December 2018, US lawmakers proposed legislation to prevent price manipulation and to position the US as a market leader.

Meanwhile, skeptics gleefully claim that bitcoin is near death amid the current market slump. But the original cryptocurrency has been proven itself resilient during its 10 years in existence.

Having pro-crypto politicians in the United States government could usher in a sea change for the industry. As CCN reported, Mick Mulvaney — the acting White House Chief of Staff — has been bitcoin advocate since 2014.

Mulvaney is also the director of the Office of Management and Budget. His job is to prepare President Donald Trump’s budget proposals to Congress. Having bitcoin proponents at the highest levels of the federal government could be a boon or a bust for the crypto market. Only time will tell.