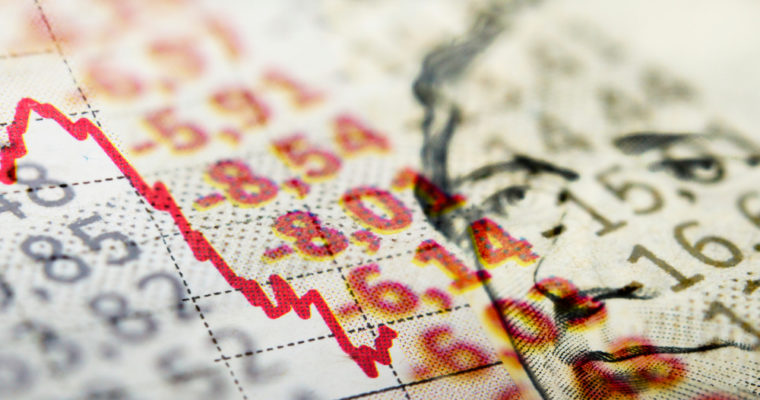 Despite a recent stock market rally that has seen the Dow Jones Industrial Average rally back toward 24,000, economists are warning that the partial government shutdown and other factors have put the United States economy at its greatest risk of plunging into a recession in more than half a decade.

According to a new survey conducted by Bloomberg, economic analysts believe there is a median 25 percent chance that the US will enter a recession within the next 12 months, ending an era of economic growth that began in 2009 and is just months away from becoming the longest on record.

“It’s not our call that there’s a recession coming soon by any means, but financial conditions have tightened materially over the past two months, you have ongoing trade issues that are weighing on global growth, and you’re seeing business confidence waning a bit,” said Brett Ryan, a US economist at Deutsche Bank AG. “The government shutdown weighs on business confidence and could weigh on consumer confidence.”

Indeed, both the ongoing US-China trade war and the partial government shutdown have already shaken the markets to various degrees, and while both could be resolved within the near future, their impacts could linger for far longer, even in a best-case scenario.

The world’s two largest economies recently wrapped up three days of mid-level trade talks, with both sides indicating that they had made significant progress toward rectifying their differences before new tariffs kick in on March 1.

Both countries have been hurt by the trade war, with the US stock market cratering in the fourth quarter and China publishing data that suggests its economic growth has begun to slow.

The Trump administration, for its part, has alleged that China’s weakening economy proves the US is winning the trade war. However, in an increasingly globalized economy, a weak China will make itself known on the balance sheets of US companies, and firms such as Apple and Starbucks are already feeling the heat from reduced Chinese sales.

Now in its 21st day, analysts say that the US government shutdown could cause quarterly economic growth to decline by as much as 0.2 percent for every week that it extends.

As CCN reported, affected federal workers will miss their first full paychecks today, and private sector companies such as American Airlines are already feeling the pinch from reduced government travel.

The effects could grow even more pronounced if, contrary to public assurances, the Internal Revenue Service cannot process tax refunds in a timely manner, delaying the annual economic jolt that accompanies the return of billions of dollars into the consumer sector.

If the government shutdown continues any longer, it will constitute the longest-ever lapse in federal funding, taking the nation — and the stock market — into uncharted territory.

83% of Economists Believe US Will Enter Recession by 2021

That not only places the risk of recession the highest level in the Journal’s economist poll since 2011 but it’s also nearly double the risk from a year ago when respondents forecast the probability of a recession at 13 percent.

Bernard Baumohl, chief global economist at the Economic Outlook Group, was quoted by the Journal as saying:

A further deterioration in the trade dispute with China, combined with a deeply divided U.S. government and a conclusion to [special counsel Robert] Mueller’s investigation could sap all the energy out of the economy.

Looking further ahead, more than half of economists — 56.6 percent — predicted that the US economy would enter a recession by 2020. An additional 26.4 percent of economists said that they foresee the recession beginning in 2021, meaning that nearly every analyst surveyed believes the decade-long economic boom is on its last legs.

David Rosenberg: US out of ‘Fiscal Ammunition’ to Address Recession

What’s particularly concerning to some analysts is that when the US does enter a recession, it will do so without the capability to address it.

That’s the fear of David Rosenberg, the top economist at Canadian wealth management firm Gluskin Sheff, who predicts that there is an 80 percent chance a recession will strike within the next year. He said that fiscal policy had already been stimulated to such a degree that central banks and legislators would find themselves out of tools to help the economy regain its footing.

“How are we going to stimulate fiscal policy? We already did that at the peak of the cycle,” he said, as CCN reported. “We don’t have the fiscal ammunition.”

Of course, the stock market is off to its hottest start in more than a decade, a fact that bulls can cite to bolster the case that the rally just enduring a “mid-life crisis,” as Fundstrat’s Tom Lee recently said.

However, bears can just as easily retort that the last year the Dow and other major US indices performed this well was 2006, just months before the onset of the financial crisis. Perhaps that’s why the gold price is surging, even as stocks continue to enjoy a buoyant run during the early days of 2019.

Currently range-trading around the $1,300 mark, gold is up nearly 4 percent over the past six months, with most of those gains coming within the past month.

Even silver, once lambasted as the “most-hated” precious metal, has found renewed interest among speculators. Over the past three months, the silver price is up 6.99 percent, compared to gold’s 5.61 percent increase.

Tellingly, investment bank Goldman Sachs believes gold could rise another 10 percent over the next 12 months to $1,425 per troy ounce, largely on fears of a potential recession.

“Going forward gold will be supported primarily by growing demand for defensive assets. The same is also true of central bank buying, with rising geopolitical tensions incentivizing more central banks to re-enter the gold market,” Goldman’s Jeffrey Currie said in a note to clients on Thursday.

Would Bitcoin Shine in Economic Recession?

As noted in previous CCN coverage, a recession would present an interesting opportunity for bitcoin, which was launched in the wake of the 2008 financial crisis but grew up amid a historic bull run on Wall Street, to establish itself as the “digital gold” that so many of its backers believe it can be.

The bitcoin price, following a Thursday sell-off, currently sits around 80 percent below the all-time high it set in late 2017, giving it plenty of room to rally before having to test fresh highs.