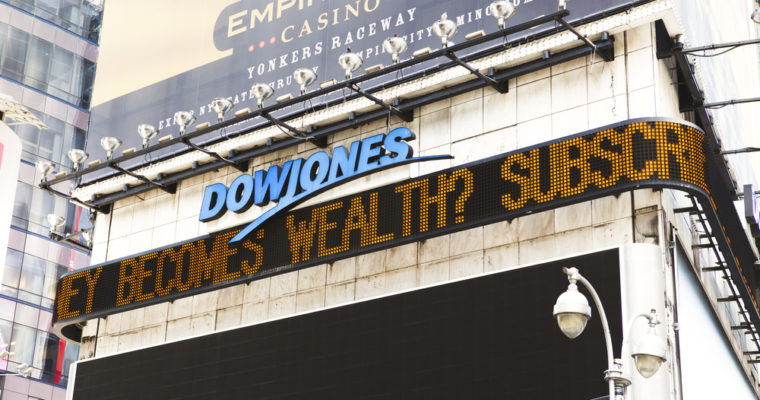 All of Wall Street’s major indexes were trading lower by mid-morning, following in the footsteps of a lackluster pre-market session for Dow futures. The Dow Jones Industrial Average opened 68 points lower and was down by as much as 176 points. At the time of writing, the blue-chip index had pared those losses to 38.9 points to settle at 23,840.22.

Slumping technology shares weighed on the Nasdaq Composite Index, which declined 1.1% to 6,883.11.

The major indexes are riding a four-day winning streak and have rebounded more than 10% from last month’s low. Despite the rebound, implied volatility continues to hold near the historic average, which points to expected turbulence in the near term. The CBOE Volatility Index, also known as the VIX, briefly traded above 21.00 Thursday morning.

As the partial government shutdown stretches into its third week, federal employees will lose their first full paycheck on Friday, placing further pressure on lawmakers to break the impasse. Talks to reopen government broke down again on Wednesday after President Donald Trump stormed out of a meeting with Democrats over proposed border funding. Speaker Nancy Pelosi said she would not fund a border wall even if the president agreed to reopen the government.

Trump voiced his displeasure with “Chuck and Nancy,” the latter referring to Senator Chuck Schumer, in the following Twitter post:

Although government shutdowns have become common since Trump took office, the current impasse could undermine economic growth and further erode confidence in his policies. Read more: President Trump Makes His Case for a Border Wall as Economy Hangs in the Balance.

Investors seeking protection from the chaos on Wall Street have piled into gold and other haven assets. Bullion came within $2 of $1,300 on Thursday, its highest in nearly seven months. Gold’s February contract is currently priced at $1,292.80.

Cryptocurrencies experienced renewed stability during the height of the stock-market selloff last month. However, they too have come under pressure Thursday morning. The cryptocurrency market lost $10 billion in value overnight as the bitcoin price plunged 5% in the span of an hour. The leading digital currency is currently valued at $3,784, according to CCN’s price tracker.