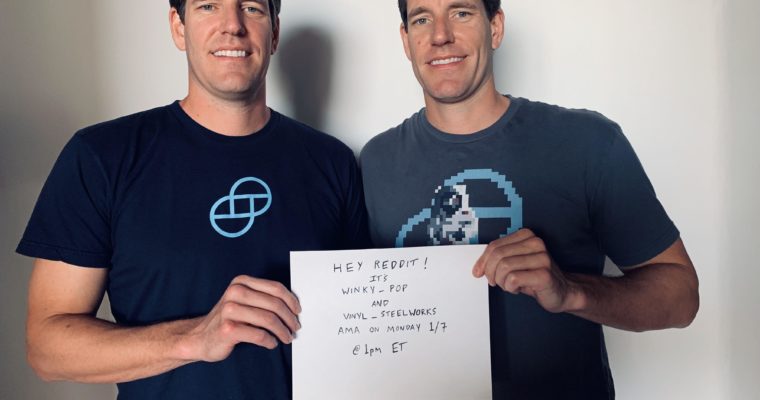 Cameron and Tyler Winklevoss did an Ask Me Anything session on Reddit following a full-page advertisement in the New York Times.

The twins answered some of the questions asked, including this one, which CCN also recently reported on.

Some voices in crypto took umbrage with your recent advertising campaign in NY. The slogan read “Gemini: The REGULATED Cryptocurrency Exchange”. Could you explain the reasoning behind it? Does Gemini stand alone in this respect?

We know we aren’t going to please everyone but the healthiest and most vibrant economies have thoughtful rules to promote positive outcomes. You can’t point to a lawless economy that is thriving.

To be clear, there are exchanges and custodians that subscribe to our principles and it’s encouraging to see that we are not alone in this regard — but for us this is a core focus and something we have worked hard to be thought-leaders in.

Bitcoin Is “Most Likely The Winner”

A user asked “Do you think Bitcoin will allways be Crypto #1?”

To this, Cameron Winklevoss said:

Bitcoin is certainly the OG crypto! It’s hard to defeat network effects — so in terms of ‘hard money’ (i.e., store of value) Bitcoin is most likely the winner in the long term.

This led to unanswered questions about CW’s “definition” of Bitcoin from a Bitcoin Cash proponent, who argued that Bitcoin Cash is now Bitcoin in his view.

Another user asked about the contentious issue of whether or not Bitcoin is a “store of value.”

Isn’t calling Bitcoin a “Store of Value” creating a lot of problems for resolving the bitcoin scalbility issues and thus using it as transfer of value?

To this, Tyler Winklevoss responded that decentralization is, in his view, the “heart of the matter” as regards the Bitcoin scalability debate. This debate led to the hard fork and subsequent creation of Bitcoin Cash.

Gemini “Committed As Ever” to Bitcoin ETF

Cameron Winklevoss answered a question about the “short-term” plans around making a Bitcoin ETF a reality. He gave some examples of actions Gemini is undertaking to foment this sought-after product.

We understand the Commission’s concerns and are working hard to address them (i.e., increased marketplace surveillance). […] We are committed as ever to making an ETF a reality!

A user says that he has concerns with “marketplace surveillance.” To this, Cameron responded:

I know, it sounds worse than it is, lol. The term suffers from a branding issue, but it’s not Big Brother. Marketplace Surveillance is commonplace in equities and derivatives markets — so we aren’t re-inventing the wheel here, just bringing best practices into crypto.

Segwit On the Cards for Gemini

A user asked a somewhat difficult technical question regarding why Gemini has yet to implement Segregated Witness. Tyler Winklevoss answered this question by saying:

Our Bitcoin hot wallet was made before Segwit was but a twinkle in Pieter Wuille’s eye. It would be very tricky to retrofit Segwit into there. So we built a new hot wallet, from the ground up, with support for Segwit, transaction batching, Bech32 addresses, and all sorts of other goodies. We used that new system for Zcash, Litecoin, and Bitcoin Cash, which is why we’re already using both native and P2SH wrapped Segwit for Litecoin.

CCN asked some questions that were not answered.

At time of writing, Gemini was the #52 in terms of market volume. Their strategy of cautiously implementing additional crypto products has seen their retail market potential usurped by exchanges like Coinbase and Binance. Coinbase was #30. Binance was #2, recently overtaken by newer contender LBank.