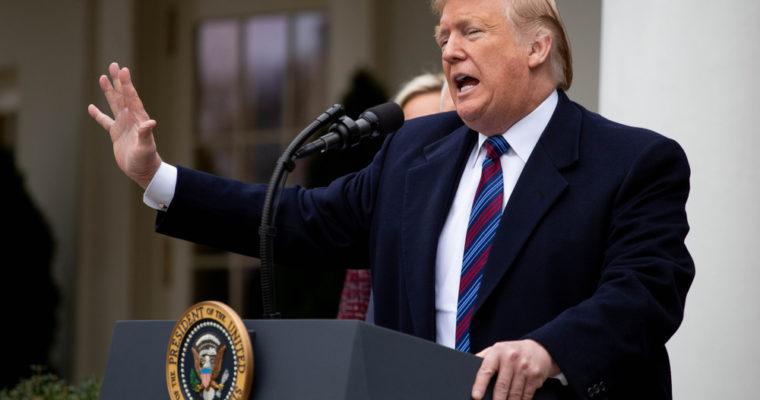 U.S. stocks exploded higher on Tuesday, building off a solid pre-market session that was fueled by optimism on free trade and the easing of political tensions in Washington. President Trump will deliver a prime-time address Tuesday in an attempt to shore up public support for his proposed border wall with Mexico.

All of Wall Street’s major indexes traded higher after the open, with the Dow Jones Industrial Average gaining as much as 333 points. At the time of writing, the blue-chip index was up 105 points, or 0.45%. Shares of Boeing Co (BA), DowDuPont Inc. (NWDP) and United Technologies Corp (UTC) were the biggest gainers through the mid-morning.

The S&P 500 Index opened sharply higher before paring gains. It was last up 0.31%. The large-cap index is on track for its eighth gain in the last nine sessions.

Meanwhile, the Nasdaq Composite Index surged 1.3% after the open but has since pared its gains down to 0.27%.

Markets are responding positively to the apparent softening of trade tensions between the United States and China, which kicked off a new round of negotiations this week. The unexpected appearance of Chinese Vice Premier Liu He has bolstered optimism that Beijing is serious about resolving the dispute and addressing the Trump administration’s call for accountability.

Both sides made important progress on Tuesday, with China agreeing to open its market to U.S. goods and services.

Investors were also encouraged by news that the Internal Revenue Service (IRS) will process tax refunds even if the government shutdown extends into filing season. The decision ensures that hundreds of billions of dollars flow to households without delay. It also gives lawmakers more breathing room to negotiate a new budget.

President Trump will deliver a prime-time address Tuesday at 9:00 p.m. ET in an effort to garner public support for his proposed border wall. Funding for the steel barrier divided Congress, blocked the formation of a new budget, and even prompted one congressman to mull blockchain crowdfunding. According to The Wall Street Journal, the address will last seven to eight minutes and be delivered from the Oval Office.

The White House tabled a new budget proposal over the weekend, which included funding for a border wall and additional processing centers. The document was immediately shut down by Democrats.

The Trump administration believes that a wall along the U.S.-Mexico border is necessary to prevent the inflow of illegal migrants, which are estimated in the tens of millions. New border infrastructure was one of the core mandates of Trump’s 2016 presidential run.