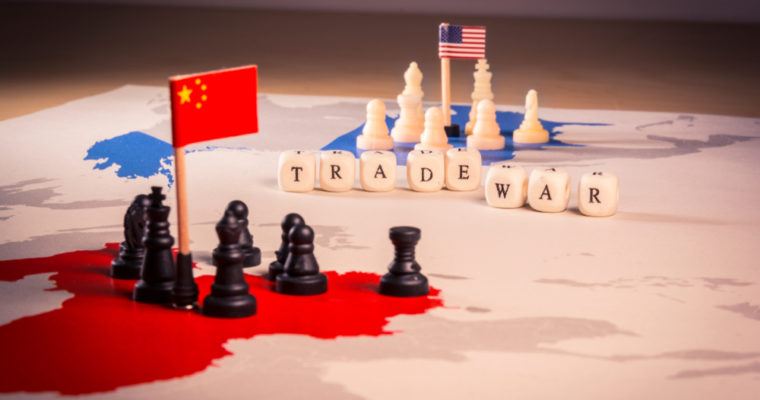 Dow Jones Industrial Average futures mostly traded sideways on Monday morning, as the US stock market waited to see whether renewed negotiations between the world’s two largest economies would bring an end to the US-China trade war.

At 8:19 am ET, Dow futures implied an opening bell gain of 47 points or 0.20 percent, while S&P 500 futures and Nasdaq futures were up 0.04 percent. Nasdaq futures, meanwhile, had not moved from Friday’s close. All three indices had traded in the red earlier in the day.

Those muted movements marked a severe departure from Friday’s close when all three indices punctuated the week with massive rallies. The Dow rose 746.94 points or 3.29 percent to close at 23,433.16, and the S&P 500 closed at 2,531.94 for a daily gain of 3.43 percent. The Nasdaq managed to surge even further, gaining 4.26 percent ahead of the closing bell.

In what has quickly become the “new reality” for investors, the stock market has been intensely volatile in recent weeks. Now, though, it appears that the Dow and other major indices are waiting for more details on renewed US-China trade talks to determine whether it will build on Friday’s recovery or slip back into the red.

On Monday, Deputy US Trade Representative Jeffrey Gerrish led a delegation to China for two days of trade negotiations. The first day of talks brought an unexpected visit from Chinese Vice Premier Liu He, the country’s top economic policymaker and the direct head of the trade discussions.

The standoff between the two countries has begun to make itself known in the markets, with tech bellwether Apple forced to slash revenue guidance due to poor fundamentals in China, the first major indication that US companies stand to take severe losses if the “tariff truce” expires on March 1 without a new trade agreement.

Some analysts have speculated that a weak stock market could force US President Donald Trump’s hand, but US Trade Representative Robert Lighthizer has reportedly been adamant that he wants to prevent Trump from cutting a deal that includes “empty promises” from the Chinese.

Consequently, it seems like traders are holding their fingers off the trigger until more details from the trade talks emerge. Liu’s appearance at the talks is likely a positive sign, though it’s still not clear from reports how great a role he played in Monday’s discussions.

Government Shutdown: Week 3 with No End in Sight

On the domestic front, the markets could soon begin to see the impact of the partial government shutdown, which has now entered its third week with no end in sight.

The Democratic-led House of Representatives and the Trump Administration continue to spar over funding for the president’s proposed border wall, with neither side caving to pressure to strike a deal to fund the nine federal departments that ran out of money on Dec. 22. An estimated 800,000 federal employees have been placed on unpaid furlough or forced to work without pay, leading to mass callouts in the Transportation Security Administration (TSA) and other high-visibility departments.

As of Monday morning, the 16-day shutdown is tied for the third-longest in US history, and the number of federal employees refusing to show up to work will only increase as people grow tired of working without pay or seek temporary employment to help cover their monthly expenses.

US Taxpayers Get Cold Shoulder from IRS amid Shutdown

A prolonged shutdown would have a much wider impact moving into tax season, as the Internal Revenue Service (IRS) is one of the agencies currently operating at limited capacity. While US taxpayers must still submit their annual tax returns and estimated quarterly tax payments, the IRS said that it may delay refund processing if filing season opens with the shutdown still in force.

More than just a frustration for US residents, delayed refund processing could deprive the economy of a regular source of consumer spending since many taxpayers use their annual refund checks to fund or place down payments on vehicles and other large purchases.