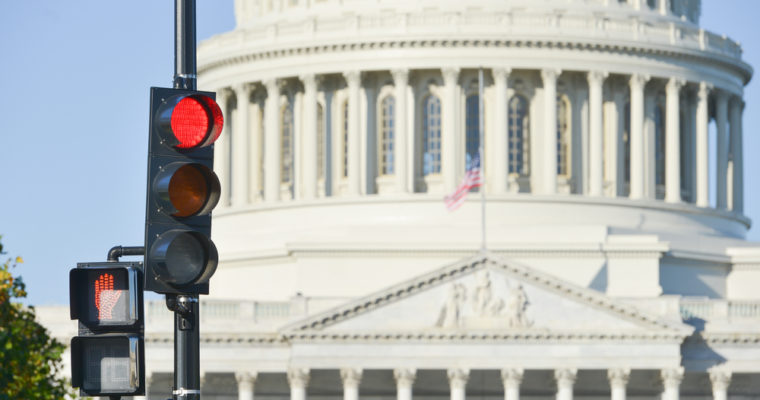 The Dow Jones Industrial Average and other US stock market indices appear poised to snatch back a portion of yesterday’s massive losses, even as Congress and President Donald Trump continue to dig in their heels on the proposed border wall funding that has prevented the federal government from ending the partial government shutdown.

As of 7:44 am ET, Dow futures implied an opening-bell rise of 288 points or 1.27 percent. The S&P 500 awaited similar gains, as futures signaled a 1.34 percent rally to 2,450. The tech-heavy Nasdaq, which had been the previous day’s worst performer, looked to be Friday’s largest gainer, as futures implied a rise of 100 points or 1.62 percent from Thursday’s close.

The move came despite the continued inability of the now-divided US government to end the partial government shutdown that has left federal employees from nine departments furloughed indefinitely.

On Thursday, the Democratic-controlled House of Representatives passed two spending packages that would end the partial government shutdown. One bill would allow eight shuttered departments to reopen and operate through the end of September, while the other would fund the Department of Homeland Security through Feb. 8.

However, the spending packages do not include the $5 billion in border wall funding that the Trump administration has requested from Congress, and the president said that he would not sign legislation that fails to provide border wall funding.

As he stated in a briefing on Thursday:

US Sending Delegation to China — End to Trade War in Sight?

On the international front, however, things are looking a bit rosier. The Wall Street Journal reported that Deputy Trade Representative Jeffrey Gerrish would lead a trade delegation to China at the beginning of next week, reigniting hopes that the world’s two largest economies will bring an end to the trade war that has battered the markets in recent months.

Just two days prior, tech bellwether Apple had slashed its quarterly revenue guidance due to weak economic fundamentals coming out of China, sending the stock market into a tailspin on Thursday. The Dow lost 660.02 points or 2.83 percent, while the Nasdaq plunged by a full 3.04 percent and the S&P 500 lost 2.48 percent.

Apple shares themselves fell 10 percent to $142.19 at the market close, though they managed to crawl back to $144.20 during pre-market trading. Since hitting a yearly high of $233.47 on Oct. 3, AAPL has declined by nearly 40 percent, more closely mimicking the movements of the bitcoin price than what one would expect of the first company to hit a $1 trillion market cap. Since reaching that mark, Apple has shed more than $450 billion in value, which is roughly the equivalent of the Warren Buffett-led Berkshire Hathaway.

However, this isn’t the first time that the US and China have appeared close to a trade deal. Earlier, Trump stoked investor optimism by claiming that he and President Xi Jinping of China had made significant progress toward the outlines of an agreement, only to have US Trade Representative Robert Lighthizer throw cold water on those statements — err, tweets. Given the volatility of this White House, investors would do well to avoid getting ahead of themselves before the ink has been put to paper.