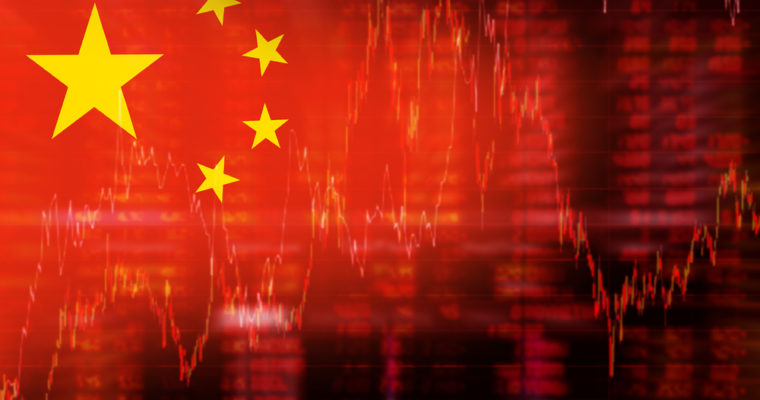 Apple stock plunged to its lowest point since July 2017 on January 2, fueled by an alarming drop in iPhone and iPad demand from China, whose economy is eroding. This caused a 300-point drop in Dow Futures, as CCN reported. As of this writing, AAPL was trading at $144.12 a share, down 8.7% from yesterday’s closing price of $157.92. Trading volume was heavy, suggesting a mass sell-off could be in the making.

Apple shares (AAPL) tumbled 9% on January 2, after CEO Tim Cook revised the company’s first-quarter outlook downward and said it would miss its Q1 revenue projections by at least $5 billion.

In a sobering letter to investors, Cook expressed shock at the fallout that the tanking Chinese economy is having on Apple’s bottom line.

“While we anticipated some challenges in key emerging markets, we did not foresee the magnitude of the economic deceleration, particularly in Greater China,’ Cook wrote.

He continued: “In fact, most of our revenue shortfall to our guidance, and over 100 percent of our year-over-year worldwide revenue decline, occurred in Greater China across iPhone, Mac and iPad.”

Tim Cook downplayed the impact that its current financial woes will have on its future earnings, noting the company’s reputation for innovation.

“Apple innovates like no other company on earth, and we are not taking our foot off the gas,” Cook vowed.

Apple’s stock has been in trouble for the past few months, as CCN reported. Two weeks ago, AAPL flashed a bearish “death cross” for the first time in three years — suggesting that a major selloff is lurking around the corner.

On Dec. 21, 2018, the stock cratered to a 10-month low amid reports that a German court had ordered it to stop selling some of its older iPhones because they infringed a Qualcomm patent.

Apple has now became the fifth and final FAANG stock to produce a death cross. FAANG is an acronym for the five best-performing tech stocks in the stock market: Facebook, Apple, Amazon, Netflix and Alphabet’s Google.

El-Erian said the global economy will come under pressure in 2019 due to financial uncertainty in Europe and China.

However, El-Erian said a US recession is unlikely because the economy is robust, but we can expect erratic fluctuations on the Dow Jones Industrial Average in 2019 because economic instability will roil China and Europe.

“Don’t be surprised if you see these 1,000-point swings in the Dow Jones,” El-Erian said. “That is our new reality for a while.”

As for the bitcoin bear market, Mohamed El-Erian said he believes that cryptocurrencies will definitely survive the downturn and be more widely adopted, but they won’t replace fiat money anytime soon.