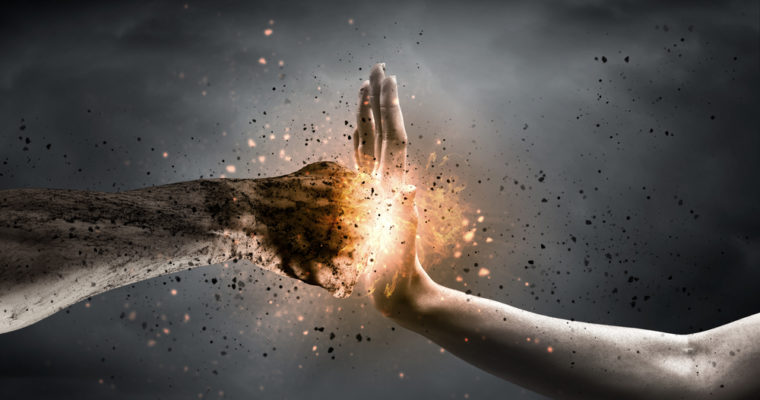 The bitcoin price consolidated this Thursday as $4,000-level continued to block the rally from a breakout attempt.

The bitcoin-to-dollar exchange rate dropped as much as 5.36 percent of its value since its yesterday’s high at $3,971. The pair at press time is correcting higher on moderate volumes, up 0.71 percent from its intraday low at $3,758. The US dollar rate is posting minor losses owing to poor export data from the US markets. But its benefits are visibly going to the Japanese yen the most.

Bitcoin is heading towards the neckline formation of the inverse head and shoulder pattern in blue, clearly complimenting the selling sentiment below $4,000. Also acting as a strong resistance is the 50-period moving average depicted in navy blue.

So far, a breakout attempt is looking less likely to happen on every pullback action. At worst, bitcoin could form a double bottom above $3,000 or extend its bearish momentum to establish a new two-year low. Under an ideal circumstance, bitcoin could continue to consolidate sideways inside the current range, bringing the market to a bias-conflict scenario.

The RSI momentum indicator since July 2018 has not crossed above 60, a bullish zone. It is creating higher highs ever since bottoming out in December 2018, now awaiting a breakout or pullback action, also confirming the beginning of a near-term bias-conflict.

The bitcoin price action as of now is following a minor uptrend, setting its upside target towards the neckline, as discussed above. Our intraday strategy is more focused on historical levels to get in and out of the market on small profits. We are treating the rising trendline of the right shoulder as our indication to apply our intrarange strategy.

That said, if bitcoin breaks below the blue rising trendline, then it would have us open a short position towards our immediate downside target defined by the 200-period moving average. A further break and we’ll extend our downside target to $3,567. In both the cases, our stop-loss order will be maintained just 1-pip above the entry position.

If bitcoin continues to form higher highs while staying above the rising trendline, then we will wait for the price to break above the neckline. As it does, we will open one long order towards $4,000 as our interim upside target. A stop loss just 1-pip below the entry position would maintain our risk management strategy.