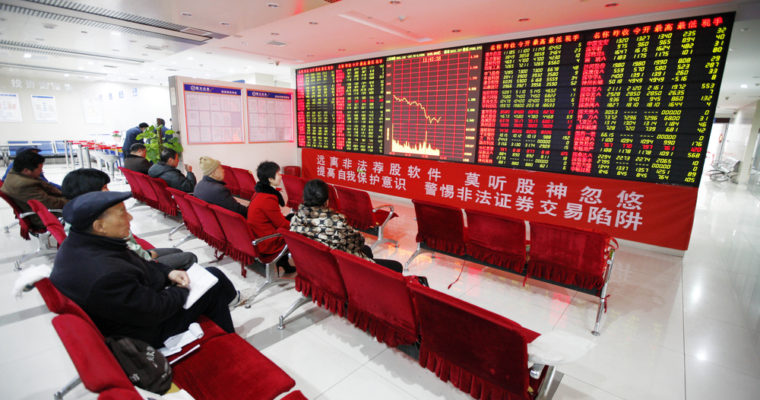 Dow Jones Industrial Average futures portended a weak opening to the 2019 trading session on Wednesday, as the US stock market extended a downturn that saw the Dow, Nasdaq, S&P 500, and other major indices post their worst yearly returns since the 2008 financial crisis.

Some analysts pointed the finger at disappointing economic data from China, whose manufacturing sector contracted during December for the first time in more than two years.

According to the Chinese National Bureau of Statistics, the nation’s Purchasing Managers’ Index (PMI) fell to 49.4 in December. A PMI below 50 indicates contraction. Weighed down by the US-China trade war, analysts had expected PMI to drop slightly to 49.9 from November’s 50.0 reading. However, the plunge all the way to 49.4 was a surprise, perhaps signaling that Chinese manufacturers are already beginning to feel the pinch from the trade war.

Further weighing on the Dow and other stock market indices are reports that the US and China may not be as close to reaching a new trade agreement as President Donald Trump had claimed last week.

Previously, Trump tweeted that a deal was “moving along very well” following a “very good call” with President Xi Jinping of China. This tweet had led to a moderate rally ahead of Monday’s holiday-shortened trading session — the last trading day of 2018.

However, a New York Times report indicated that US Trade Representative Robert Lighthizer was less optimistic about the state of the negotiations, telling friends and associates that he intends to prevent Trump from accepting “empty promises” from China as the two sides hammer out a deal.

Is the US-China Trade War a Distraction from the Market’s True Foe?

Meanwhile, other economic analysts warn that the US-China trade war, though still significant, may not be the stock market’s greatest concern in 2019.

As CCN reported, Panos Mourdoukoutas, Professor at the Department of Economics chair at Long Island University, wrote in Forbes that he believes that — spurred by the rise of interest rates and the end of “easy money — business and bank failures would be the stock market’s true foe this year.

“Simply put, the end of free money is setting the global economy into a vicious cycle of slower growth,” he wrote. “Less consumer debt could fuel less spending. And less spending could fuel waves of business failures.”