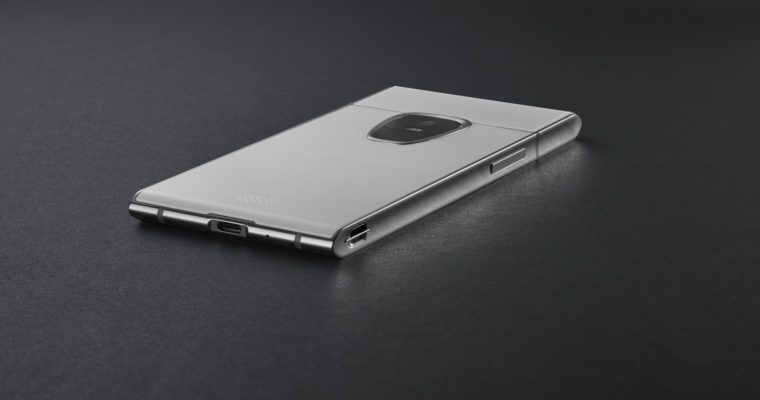 The FINNEY phone came out today at a launch event in Barcelona.

The $999 phone is the first of its kind, integrating blockchain technology at its core in order that its users may can securely use blockchain products. The product aims to address issues that cryptonaughts face in mobile computing, particularly those related to securely transacting, and it is the latest in a projected long line of offerings from the makers of SOLARIN.

The phone runs on SirinOS, which is a fork of Android with the express intention of more deeply integrating blockchain capabilities and a decentralized application (“dApp”) marketplace. It sports a secondary screen called a “safe screen” which is two inches in size and allows the user to securely access a built-in cold storage wallet. In shape and design, it is not unlike the SOLARIN.

SirinOS will not be limited to the FINNEY, as SIRIN LABS said in their launch statement today that they are “also looking for strategic OEMs to implement SIRIN OS™ in additional consumer devices.” This means that the launch could attract interest from other phone manufacturers like ASUS, Motorola, or Huawei. HTC has already announced its own intentions to bring a phone to market, but they also have a history of supporting multiple operating systems, having at one time had both a popular Windows phone and several Android phones on the market. Dedicated HTC users have even managed to get Blackberry’s operating system running on the hardware.

Sirin simultaneously launched a “concept store” in London which will double as an educational hub for users. That is: people who buy this phone for its other features (such as security and competitive design) will be able to have all their questions answered at this place. The pre-launch website bills an “incentivized learning” platform or “learn and earn.” The description amounts to a blockchain-based Apple Genius Bar.

In anticipation of SirinOS, the FINNEY Phone, and the stores being launched, the SRN token has been available for some time on several exchanges. It is described as a “utility token” which acts as the cornerstone of the presented ecosystem. Exactly what role it plays was outlined in their March release of the whitepaper:

“[…] purchasing SIRIN LABS’s products, applications and services from the moment the SRN tokens are issued and distributed to crowdsale participants (24hr. after crowdsale ends). Moreover, special discounts will be given to SRN Token holders who pre-order or purchase products from SIRIN LABS using their SRN tokens.”

True to their word, those who purchase the FINNEY with SRN tokens will receive a 10% discount today. The token was trading at around ten cents Thursday morning.

Speaking of Apple, Sirin has gone into business with the same manufacturer as Apple, using Foxconn to mass-produce the world’s first blockchain phone on the market. In an interview with CCN, SIRIN CMO Nimrod May said:

“By choosing Foxconn to build the FINNEY, we’re demonstrating the public’s desire to have a mass-market smartphone that is able to safely and securely operate within blockchain and cryptocurrencies.”

A Native Mobile Platform for DApps?

There are inherent limitations to requiring every application installation to have a separate wallet implementation, and so forth. SIRIN’s phone seems to be one effort in reducing this friction – with crypto built in at the core, developers will now have a target device replete with a decentralized applications market to get listed in. Whether or not the FINNEY is a successful product, the introduction of a fully-developed crypto OS for phones is an important milestone for cryptocurrency as a whole.

There was a time when $999 would sound like too much for a phone, even an executive-class phone which puts next-generation financial management solutions in one’s pocket, but these days it is a price point which can be considered competitive when all of the features, unique and industry-standard, are considered. The FINNEY sports a 12MP camera, 128GB built-in storage (expandable), the noted “safe screen,” the ability to run regular apps from Android, and, of course, a world of possibilities through the decentralized applications forthcoming.

CCN attended the launch event and had an opportunity to spend some hands-on time with the Finney. Stay tuned for further coverage.