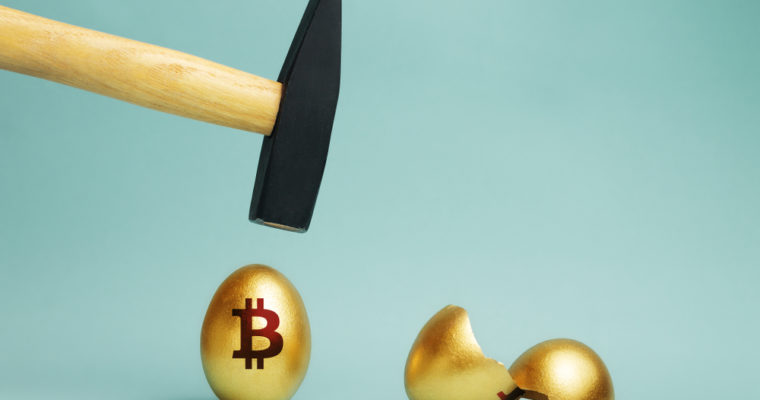 The crypto market’s extended stable action took its last breath on Wednesday as the bitcoin price dipped to a new yearly low at 5280-fiat.

The BTC/USD index fell more than 12 percent ahead of the US trading session, now trading at 5439-fiat on Coinbase. The pair was trading comfortably inside a narrow trading range since September, leading many to believe that it had established a bottom around 6000-fiat. The latest selling action brought BTC/USD to its weakest mark since October 2017.

The bitcoin flash-crash cannot be fit inside the box of technicalities and must have a strong fundamental reason behind it. This kind of price action generally appears when exchanges trade unrealistically, or some kind of regulatory action takes place. It will take a while for the market to understand the real catalysts behind the ongoing breakdown action.

Meanwhile, the US dollar continues to stay near its 16-month peak level. The greenback is benefiting from the speculation of an interest rate hike in December. Concerns over Italy‘s budget and ongoing Brexit talks are also injecting positive fundamentals to the dollar’s bullish bias.

In the previous analysis, BTC/USD was trending lower inside a falling wedge formation, indicating a near-term breakout action according to traditional technical indications. But the flash-crash has changed the dynamics upside down, now bringing the pair inside a large falling wedge formation — as can be seen in the chart above. According to this update, BTC/USD has the potential to fall as low as 4500-fiat at the end of this bear cycle, before it attempts a brief rebound towards the upper trendline of the said wedge formation.

The RSI and Stoch on daily charts have dipped or are going to fall inside their respective oversold sentiment areas. The price continues to trade lower than it’s 100 and 200-period simple moving averages. Overall, its the most extreme bearish bias the market has seen in the past three months — most because $6,000 was supposed to hold the fort against bears.

We were able to exit our short position on a small profit but ended up wearing an equally small loss after our stops against the long trades got executed. Now, according to our intraday strategy, we are in the middle of nowhere, and the levels we have in hand do not hold any new historical significance. Typically, we should not trade in this choppy market. And probably, we will keep ourselves out of it. But to those who want to trade the market anyway, feel free to use what could have been our strategy.

That said, the BTC/USD pair has established a new yearly low, which serves us as a decent interim support level. To the upside, 5633-fiat is looking like a proper interim resistance level. We expect the pair would attempt a pullback from support to clear a long position scenario towards 5633-fiat. If one wants to go long amidst strong bearish bias, he or she should make sure to keep their stop losses just 2-pips below the entry point.

A breakdown action looks possible at this moment. That said, a break below support should keep traders away from the market. We don’t know how far this downtrend can go, so better to be safe than sorry.

In case BTC/USD breaks above the 5633-resistance level, then a long position towards 5712-fiat looks achievable. Nevertheless, maintaining a stop loss order just 3-pips below the entry level would minimize losses should the bearish bias extend.