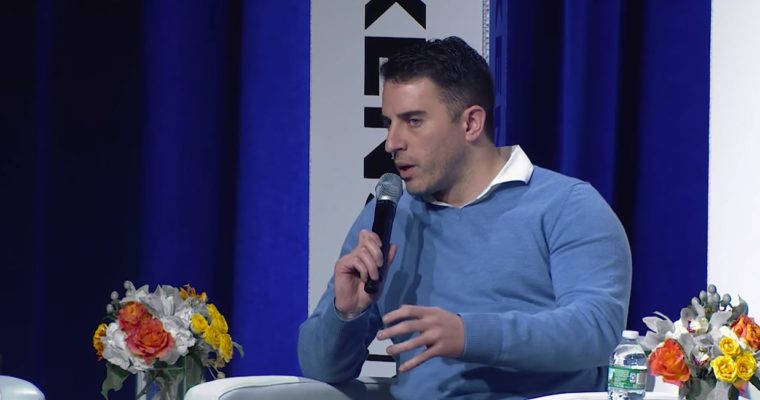 Apple abruptly removed the popular crypto podcast “Off the Chain” from its podcast store. The show is hosted by Anthony “Pomp” Pompliano, the founder and managing partner of investment firm Morgan Creek Digital Assets. The sudden move has triggered widespread censorship concerns among fans.

Pompliano tweeted on Nov. 5 that Apple mysteriously took down the podcast without explanation shortly after it rocketed to No. 4 in the investing category on the US iTunes Store.

The podcast had also been distributed on Google, Spotify, Libsyn, and other platforms.

Last week we released a podcast discussing the ultimate argument for Bitcoin.

It exploded & ranked #4 in US investing category before mysteriously being taken down by @Apple.

We had no warning. We don’t know why.

They took down our podcast, but they can’t take down Bitcoin!

“We had no warning. We don’t know why,” Pompliano lamented on Twitter. “They took down our podcast, but they can’t take down Bitcoin!”

Off the Chain was censored after an episode aired on October 31 called “The Ultimate Bitcoin Argument.” By November 2, Apple had taken down the podcast with no explanation.

The episode that apparently triggered the censorship was a conversation with bitcoin maximalist Murad Mahmudov that discussed why fiat currencies are doomed to fail, and why central banks and financial institutions should embrace bitcoin.

In the episode, Mahmudov said calling bitcoin digital gold is “an understatement,” because it’s way more revolutionary than that.

“Really what it is, is digital monetary nuclear weapons,” Mahmudov said (video below). “I believe that this will expand the economy and accelerate capitalism and free markets, and borderless commerce even more.”

Murad added: “I think that bitcoin’s volatility is great. If you zoom out and look over the last years, especially on a log chart, this volatility has been predominantly upwards…It shows people that bitcoin’s strength versus fiat currencies is strengthening.”

Pompliano told CCN that he’s troubled by the fact that he was never warned ahead of time that “Off the Chain” would be pulled and that Apple had still not responded to multiple requests seeking an explanation for the punitive action.

“I’m not sure what happened, but this has highlighted the challenges of centralized organizations,” Pompliano told CCN. “The fact that this was removed without warning is the toughest part to deal with.”

An Argument For Decentralization

When CCN asked Pompliano if he believes that Apple is censoring his podcast because it promotes bitcoin, he said he wasn’t sure, but is frustrated by the debacle.

Pompliano said the abrupt blackballing of his popular podcast makes an excellent argument for decentralization — which is the hallmark of crypto. He said it’s alarming that an individual corporation can unilaterally censor content willy-nilly.

“It is more obvious than ever that centralized organizations and products present considerable counter-party risk,” Pompliano wrote on his blog. “Regardless of the reason for Apple’s actions, an individual corporation was able to make a unilateral decision to censor content. They didn’t give us a warning or explanation.”

Concerns over censorship have caused some in the crypto community to branch out and develop blockchain-based alternatives to social media giants Facebook, Twitter, and the Google-owned YouTube.

“All of our code is open-source, meaning anyone can look at it,” said Bill Ottman, the founder and CEO of Minds.

In contrast, he said Facebook selectively censors content and “shadow-bans” certain groups with no explanation, leaving users at the mercy of the social-media monopoly.

“The reality is that they (Facebook, Twitter, Google) are punishing certain pages, and we don’t know why because they won’t share their code,” Ottman said. “Censorship affects both the left and right, and Internet freedom benefits all.”