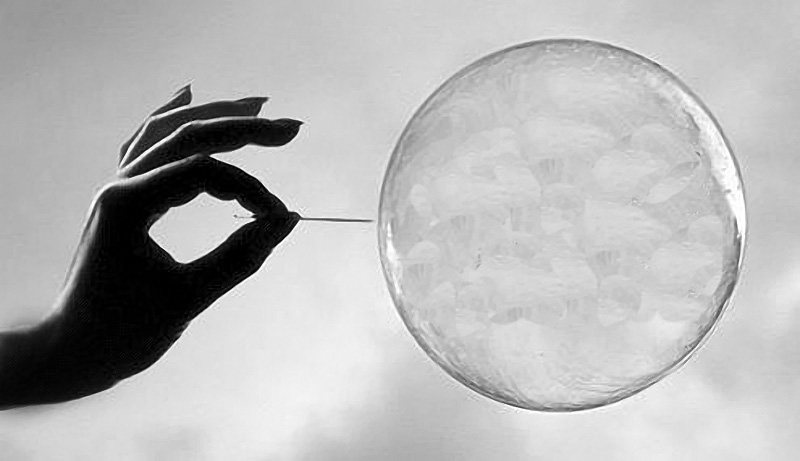 A study conducted by market research firm Juniper Research has cast doubts on bitcoin’s long-term prospects owing to various factors stacked against it including regulatory scrutiny.

Per Windsor Holden, the author of the report titled ‘The Future of Cryptocurrency: Bitcoin & Altcoin Trends & Challenges 2018-2023’ the lack of ‘intrinsic value’ in the flagship cryptocurrency portends doom:

“Bitcoin has no intrinsic value. Like any asset, it is worth whatever someone is prepared to pay for it, but it has no meaning or existence beyond the confines of the ledger. It is a bubble, and there is a strong possibility that this bubble could burst in the near future.”

The daily transaction values, on the other hand, had reached a figure of over US$3.7 billion late last year but in September the amount had declined to under US$670 million.

According to Juniper Research, the fall in bitcoin’s price happened despite the fact that leading fiat currencies have continued to be weak as a result of various factors in the global economy occasioned by the trade conflicts between the United States and China as well as the uncertainty surrounding Brexit among others.

“…if Bitcoin cannot make gains in such favourable circumstances, then it is unlikely to prosper as and when these issues are resolved,” the study concludes.

Some of the factors blamed for holding back bitcoin in the report include the restrictions imposed by governments on cryptocurrency exchanges as well as the advertising bans which were effected by tech firms such as Twitter and Google. The latter partly rescinded the ban recently, as CCN reported.

Additionally, the participation of casual investors has been limited following a decision by major banks to ban the use of their credit cards in making buying bitcoin.

While bitcoin has seen more than its fair share of prophets of doom, not everyone is betting against it. As recently as late last month, tech billionaire Tim Draper repeated his projection that the price of the flagship cryptocurrency will hit US$250,000 by 2022.

And two months ago, regular CNBC guest and co-founder of Fundstrat Global Advisors, Tom Lee, reiterated his forecast that bitcoin will be trading in the US$20,000 range by the end of this year.