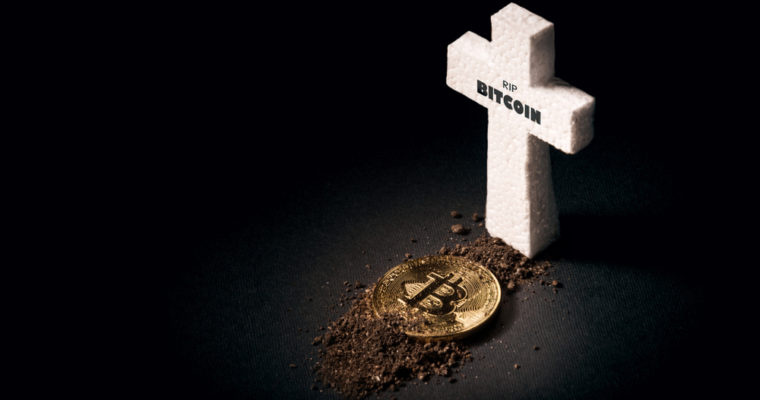 There’s something about a prolonged cryptocurrency market downturn that leaves bears jockeying to be the one to twist the final knife in bitcoin’s battle-scarred back. The latest jab comes from Marek Paciorkowski, a financial market analyst at Polish forex platform Aforti Exchange S.A.

Speaking in an interview with Romanian financial publication Business Review, Paciorkowski speculated that the bitcoin price could plunge as far as $100, a threshold it hasn’t touched in more than five years and a mark that would place it 99.5 percent below the all-time high it set in Dec. 2017.

“Considering the triangle pattern that the Bitcoin market has been tracing since March 2018 and most importantly the height of this pattern, if a breakout takes place in line with the prevailing downward trend of the descending triangle pattern, the technical target price for the Bitcoin implied by the range of the pattern will come at … USD 100,” he said.

“It may be hard to believe, but everything is possible in the financial markets and this scenario should be taken into consideration, especially if the subsequent attempts to resume the long term uptrend eventually fail and Bitcoin ends up breaching the USD 5,500 level.”

Paciorkowski based his historically-bearish forecast on proprietary technical analysis, alleging that the bitcoin price is caught in a severe downward trend out of which there is a significant chance that it may not emerge.

“Every recovery that we’ve seen so far, starting February 2018 to date, was each accompanied by lower volumes and interest from the buyers and under these circumstances we’ve concluded that ever since marking the USD 11,700 peak at the end of February/beginning of March, we’ve been clearly dealing with a downward trend within the triangle pattern,” he said. “In recent months, we have also been experiencing a contraction in the market’s volatility, as illustrated by the sideways movement in Bollinger Bands, which have acted for many times in a row as support and resistance levels.”

Nevertheless, he said that if bitcoin can manage to break above $7,715, he would take that as a reliable buy signal. Conversely, a move below $5,613 would be a “definite” sell signal. He explained, “Should the market continue to track the Bollinger Bands, then only breaking above the USD 7,715 level will count as a reliable buy signal, while dropping below USD 5,613 will be a definite sell signal. ”

According to the “Bitcoin Obituaries” index compiled by cryptocurrency resource site 99Bitcoins, bitcoin has died 312 times since the website began keeping track. You can chalk Paciorkowski’s eulogy up as number 313, but history seems to suggest that his apocalyptic prediction will not prove any more prescient than those that came before.