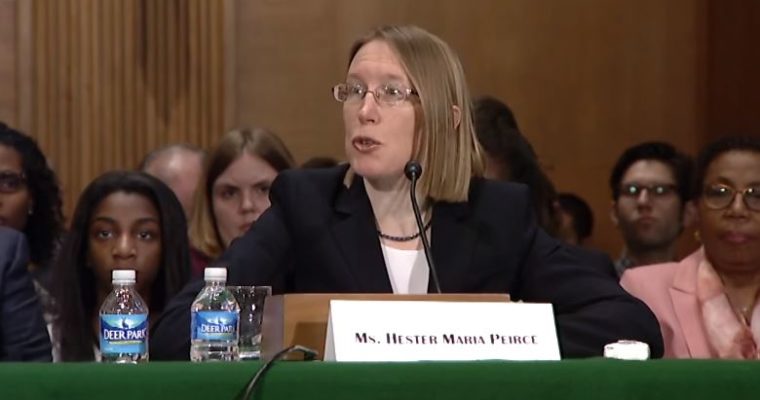 The US Securities and Exchange Commission (SEC) commissioner Hester Peirce has stated that the government should not limit the emergence of new products in the crypto market based on the perceived weaknesses of Bitcoin.

According to Peirce, the SEC should not force crypto markets to be subjected to comprehensive government regulation just to deploy products on top of the markets. She explained:

“The Commission should not default to a demand that the crypto markets be subject to comprehensive government regulation as a precondition to allowing products linked to those markets to be traded in markets that we regulate.”

SEC Should Not Evaluate Bitcoin Markets, Only Viability of Products Like ETFs

Peirce, often characterized as CryptoMom, emphasized that the rejection of the Winklevoss Bitcoin Trust exchange-traded fund (ETF) was enforced due to the SEC’s belief that Bitcoin markets have flaws relating to infrastructure.

The issue of Peirce with the decision of the SEC, which she explicitly described through a letter of dissent, is that the SEC justified the rejection of the Winklevoss Bitcoin ETF by stating that the evaluation of Bitcoin or blockchain technology as an investment or innovation was not involved in the process of disapproving the ETF.

In simpler terms, the SEC stated that the denial of the Winklevoss Bitcoin ETF had no connection to the SEC’s evaluation of Bitcoin and cryptocurrencies as an asset class.

But, Peirce stated that the rejection of the Winklevoss ETF demonstrated the SEC’s focus on Bitcoin markets, instead of the ETF itself.

“The Commission’s order included an assurance that the ‘disapproval does not rest on an evaluation of whether bitcoin, or blockchain technology more generally, has utility or value as an innovation or an investment.’ The order, however, seemed to do almost that. It focused on the alleged flaws with bitcoin markets, rather than on whether the exchange proposing to trade shares of the trust had taken steps to ensure the orderly trading of those shares,” Peirce said.

If the SEC continues to establish its focus on Bitcoin and cryptocurrency markets rather than the products or instruments launched on top of the markets like ETFs, then a publicly tradable instrument approved by the SEC could never hit US markets.

Crucially, commissioner Peirce explained that, as of current, the cryptocurrency exchange market remains inaccessible to many investors, and it requires a specific set of knowledge and know-how to invest in the crypto market.

“This complexity means that only a very particular type of investor can pursue the diversification opportunities such assets can provide. Entrepreneurs are developing new products through which people can access cryptocurrencies indirectly or hedge their cryptocurrency holdings. Bitcoin futures, for example, began to trade recently.”

If the SEC’s concern towards cryptocurrencies as an asset class is its lack of infrastructure and stability, then the SEC has to focus on providing necessary infrastructure on top of the existing crypto markets to ensure that the market is accessible by a larger group of investors.