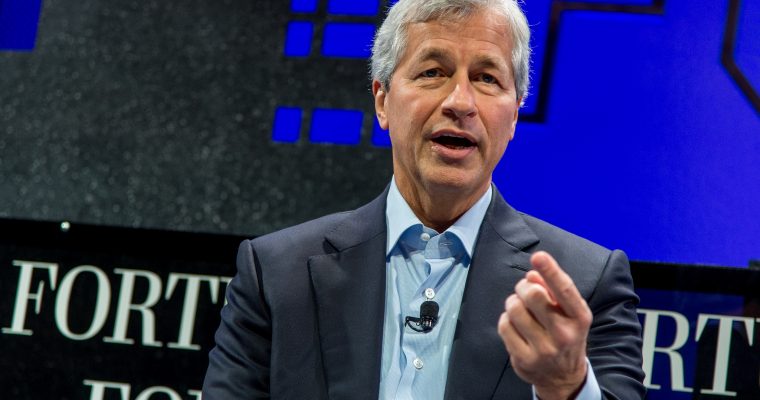 JPMorgan CEO and noted bitcoin basher Jamie Dimon says he’s not running for president, but he wants everyone to know that, if he did, he could defeat incumbent President Donald Trump.

“I think I could beat Trump” in an election, the Wall Street icon said Wednesday morning, according to a Bloomberg report. “I’m as tough as he is, I’m smarter than he is.”

“And by the way, this wealthy New Yorker actually earned his money. It wasn’t a gift from daddy.”

Dimon, as he has been sometimes wont to do after making grand claims, walked back his earlier comments, though some observers have noted that the latter part of his statement sounds suspiciously like something he would say if he were running for president.

“I should not have said it. I’m not running for president. Proves I wouldn’t make a good politician. I get frustrated because I want all sides to come together to help solve big problems.”

Trump, for his part, was not amused by Dimon’s claim that he could best him in a general election, writing on Twitter that the banker doesn’t have the “aptitude” or “smarts” and is moreover a “nervous mess” when speaking in public. Other than that, Trump said, Dimon is “wonderful.”

The problem with banker Jamie Dimon running for President is that he doesn’t have the aptitude or “smarts” & is a poor public speaker & nervous mess – otherwise he is wonderful. I’ve made a lot of bankers, and others, look much smarter than they are with my great economic policy!

Dimon, incidentally, was a member of Trump’s strategy and policy forum prior to its disbanding, and he has praised the business-friendly tax cuts that the president signed into law last year.

A presidential run from Dimon would likely be welcomed on Wall Street, but it might not be met with quite so much enthusiasm in cryptocurrency circles.

That’s because, as CCN reported, Dimon has long been one of the nascent asset class’ fiercest critics, at various points lambasting bitcoin as an outright fraud and calling cryptocurrency investors stupid. He has since said that he regrets his more aggressive remarks but remains uninterested in bitcoin.