July 20: Bitcoin (BTC) has split off from other top cryptocurrencies and shows markedly more resilience in holding on to gains secured in the major upswing that kicked off earlier this week. 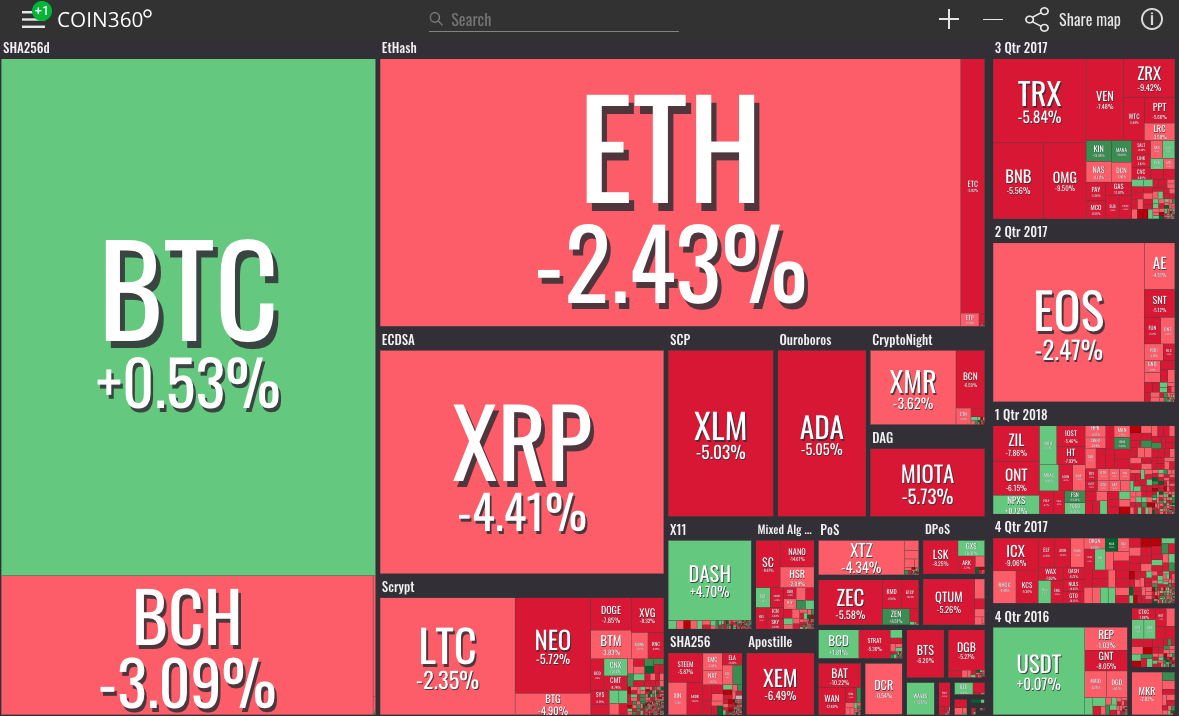 As Coin360 data shows, the top coin is an island of green, while most major alts are struggling to maintain positive momentum.

Bitcoin (BTC) is trading around $7,398, up a fraction of a percent over the 24 hour period to press time. The leading cryptocurrency has been trading sideways as of early trading hours July 18, following an impressive uptick on July 16 that accelerated yet further July 17.

Bitcoin’s weekly and monthly gains are in positive territory, at about half a percent and 20 percent respectively, according to CoinMarketCap data.

Reflecting on Bitcoin’s strong rally this week, Arthur Hayes, CEO of crypto exchange BitMEX, said today that the current bull run may yet give way to test a price point of $5,000 before heading to $50,000 in 2018. 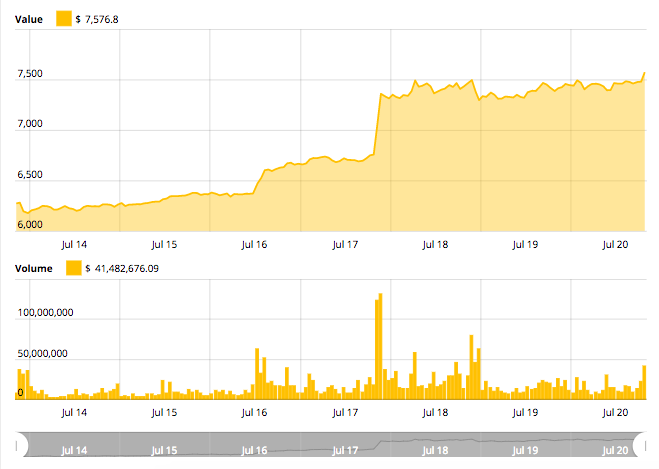 Ethereum (ETH)’s price performance has been less buoyant, with the top altcoin trading around $453 to press time, down 2.6 percent on the day. After soaring as high as $510 on July 18, the asset began to see a jagged decline.

While recent growth has secured a positive weekly percentage gain of around 5 percent, Ethereum’s monthly performance is a little more than 3 percent in the negative, according to CoinMarketCap data. 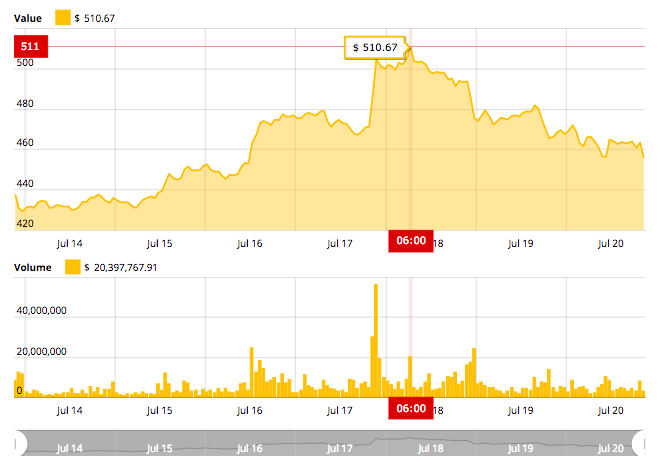 On CoinMarketCap’s listings, all of the top 10 coins by market cap — save Bitcoin and stablecoin Tether (USDT) — are seeing losses of between 2 and 5 percent over the 24 hour period to press time.

Ripple (XRP) has dropped roughly 4 percent on the day, trading at $0.46 to press time, according to CoinMarketCap. Cardano (ADA) has lost around 4 percent and is trading around $0.17 over the past 24 hours to press time.

Of the top 20 ranked coins on CoinMarketCap, Dash (DASH) has seen a solid 5 percent growth over a 24 hour period, trading just above $274 to press time. The alt skyrocketed $20 within an hour earlier today to reach $282, before dropping slightly to its current valuation. 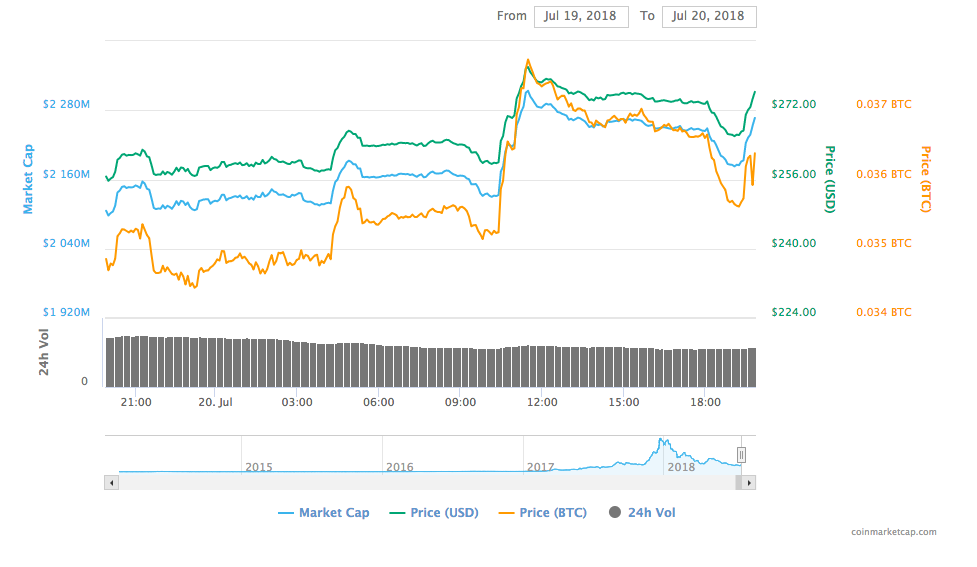 Total market capitalization of all cryptocurrencies is now at around $283 billion to press time, down from its intra-weekly high of about $299 billion. 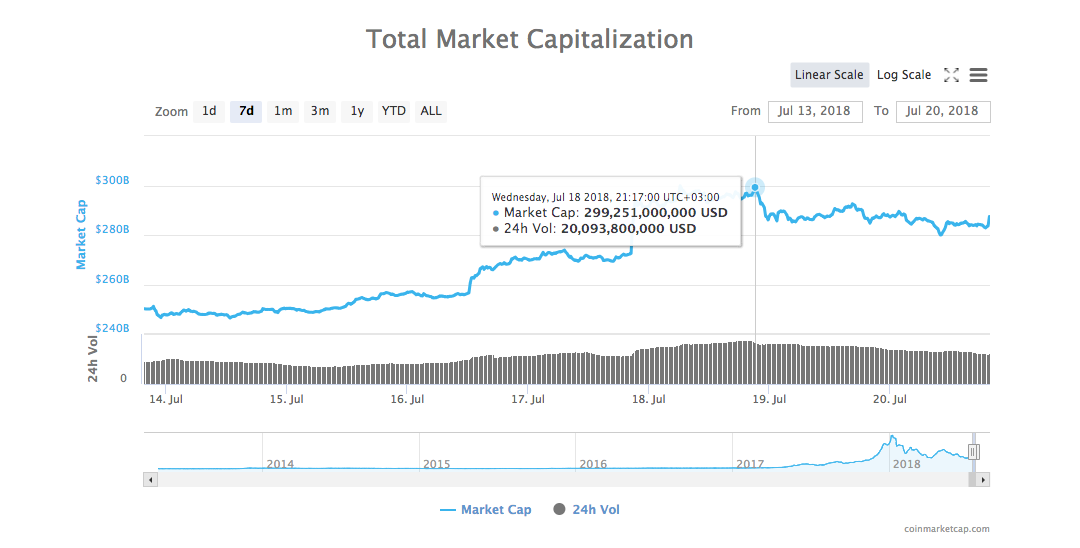 The past day has seen the news that four of the top forty spots on Fortune’s annual rankings for the most powerful young disruptors in global business have been given to five innovators from the crypto space, over twice as many as last year.

As crypto gains traction in the global mainstream, U.K. lawmakers are moving to review existing legal frameworks to ensure that British courts remain a “competitive” choice for businesses that use smart contracts.