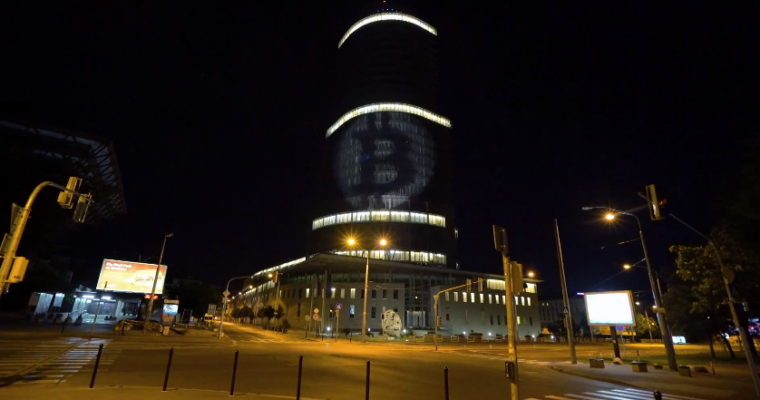 The Bratislava-based Paralelná Polis — which among other endeavors operates the Cryptoanarchy Institute — on Thursday published a video depicting its latest act of protest against the country’s cryptocurrency regulatory regime, which it claims has conducted a “witch hunt” against exchanges and other industry companies.

In the video, Paralelná Polis activists projected giant bitcoin logos on the buildings of local banks that have expressed hostility toward cryptocurrencies, culminating in the National Bank of Slovakia. The activists also briefly projected on the logo for anonymous cryptocurrency monero on the central bank.

The following statement, reproduced in full, accompanied the video:

Cryptocurrencies represent for banking system what Gutenberg’s press was for literature.

As the church lost control over the manual rewriting of books, the central banks are losing control over new cryptocurrencies.

Slovak banks, instead of embracing the unlimited possibilities of cryptocurrencies and supporting the emerging crypto companies, due to state regulators or unclear legislation remain in the darkness. A witch hunt for crypto companies and blocking transactions to crypto exchanges continue.

The (en)light(enment) to the banks is an attempt to overcome the darkness, which, like in the 15th century, prevented revolutionary book technology to establish, now in the 21st century, is threatening the rise of a new blockchain decentralized era.”

The act hearkened back to 2008 when the National Bank of Slovakia’s headquarters featured a giant logo of the euro in anticipation of the country’s adoption of the trans-European currency.

But while activists in Slovakia are shining the bitcoin logo on banks in protests, the local government in another Eastern European is using that same logo to signal its desire to be a regional hub for the burgeoning blockchain industry.

As CCN reported, a group of fintech startups including cryptocurrency exchange Bitstamp — in partnership with the local government — financed the erection of a bitcoin monument at a busy roundabout in Kranj, Slovenia’s fourth-largest city.

“By revealing the commemorative monument, Slovenia will create and send into the world a message that emphasises its openness to digitization, its susceptibility to the use of new technologies and its hospitality towards progressive thinking, which aims not only at the optimization of everyday life, but also at interpersonal trust, transparency and cooperation,” the project’s backers said in a statement. “To local residents it will be a reminder of connectivity and of openness to new things — the foundations of a quality life in the future.”

Meanwhile, cryptocurrency enthusiasts in Ukraine have started a campaign to erect a statue of Bitcoin creator Satoshi Nakamoto in Kiev at the site where a statue of Vladimir Lenin stood prior to its destruction during the 2014 Ukranian Revolution.