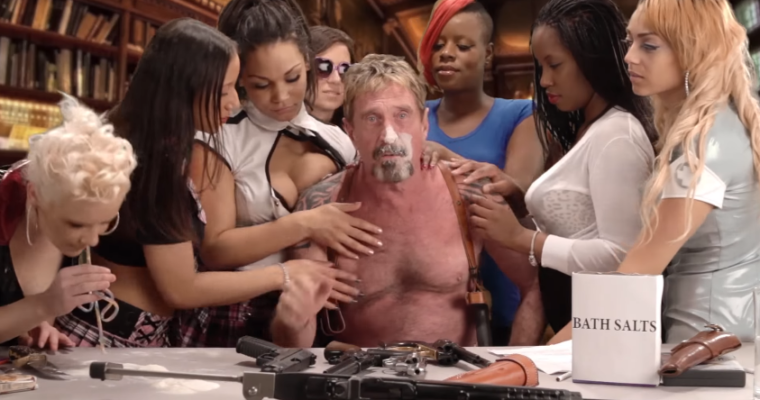 Cybersecurity pioneer-turned-crypto-troll John McAfee is at it again, and this time he’s setting his sights on HitBTC, one of the world’s largest cryptocurrency exchanges.

McAfee began his war on HitBTC last week, when, without clear provocation, he called for a boycott on the Hong Kong-based exchange, which has more than $270 million in daily trading volume.

“The crypto exchanges have become the thing that we have originally fought against. Their power is immense. Hitbtc, for example, has increased suffering for millions of poor people who cannot afford the minimum buy-in since it is greater than their monthly income,” he tweeted. “Boycott them.”

The crypto exchanges have become the thing that we have originally fought against. Their power is immense. Hitbtc, for example, has increased suffering for millions of poor people who cannot afford the minimum buy-in since it is greater than their monthly income. Boycott them.

McAfee seems to be referring to the withdrawal fees that HitBTC, like virtually all other exchanges, charge when customers remove assets from the platform, though his tweets are tellingly vague about the precise nature of his grievance.

The provocateur, who claims to have recently been the victim of a failed assassination attempt, continued his verbal assault throughout the weekend, vowing to be HitBTC’s “worst enemy” until the company takes unspecified steps to address the unspecified issue.

On Saturday, HitBTC issued a formal response to McAfee, thanking him — perhaps cheekily — for taking the “discourse to another level” and explaining the company’s policy on calculating withdrawal fees. The exchange further invited him to convey his advice on how to implement an “algorithmic solution” that would render its withdrawal fees less subject to the price volatility of the associated assets.

“Thank you for being the voice of the crypto community!, the note concluded. “We share your values!”

McAfee, it seems, disagreed, as evidenced by his reply:

“Your algorithm killed an unknown number of people. You tell me what algorithm recompenses these deaths. You have unjustly subgected Docademic [sic]. Tell me sir what do you owe to them? Docademic deserves your highest priority to make things just for your past offenses.”

While it’s possible that McAfee — who until recently charged $105,000 per tweet to promote initial coin offerings (ICO) — is truly concerned about the plight of HitBTC’s less-fortunate customers, the saga appears to be a dramatic ploy to plug Docademic, an ICO token referenced throughout his tweetstorm.

Despite claiming that he would no longer promote ICOs due to pressure from U.S. regulators, McAfee has been shilling this token on his Twitter account for several weeks, even claiming that it could hit $10 per unit by next year, up from a present value of $0.25. It’s not clear whether Docademic is paying McAfee for these tweets, but he has said on Twitter that he has invested in the project’s token.