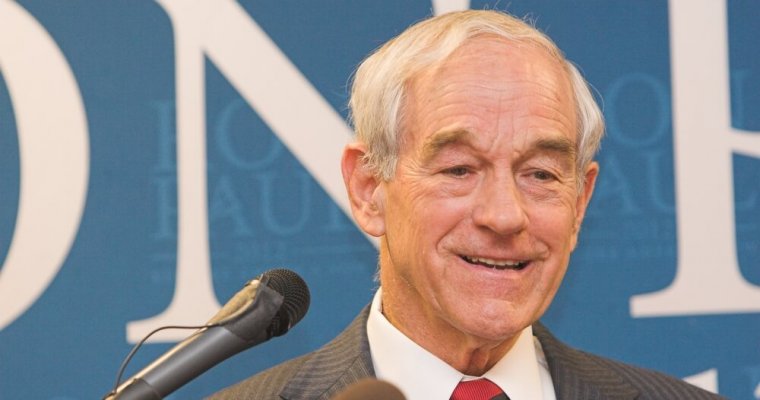 Ron Paul, a former member of the U.S. Congress and a Distinguished Counselor to the Mises Institute, has called for the legalization of competition to the U.S. dollar and a debate over the future of fiat currency, precious metals, and cryptocurrency. Writing for the Mises Institute website, he claims the U.S. does not have a free market economy since a conglomerate of people both in and out of the government run the economy, which is destined to crash.

The Mises Institute promotes the ideas of the Austrian school of economics, individual freedom and world peace.

Paul argues against central planning of the economy.

By manipulating the economy, certain individuals prevent market forces from correcting the mistakes that central planners make continuously. In time, Paul believes the market proves to be stronger than government manipulation, but the longer the manipulation continues, the greater the “bubble that always bursts.”

In the U.S., central planners want people to believe the dollar is strong and the reserve currency is secure, he noted, without considering the number of new dollars being produced. Politicians are quick to claim that the country’s high foreign debt is someone else’s fault, but not related to the government’s economic and monetary mismanagement.

The U.S. government publishes reports that claim inflation is low and should be raised under the guise that higher prices will indicate economic gains, Paul noted. He points to the Consumer Price Index and Gross Domestic Product as statistics that government officials manipulate to show economic growth. But anyone paying household bills knows these reports are false.

During the Great Depression, the government controlled the price of gold and decided who received the gold. This was done to demonetize precious metals. Today, central bankers manipulate the dollar price of gold to create the impression the dollar is stronger than it actually is, Paul noted.

The system keeps stock and bond prices artificially high to benefit Wall Street, he claims. This is accomplished by keeping interest rates lower than market rates, which results in financial bubbles and economic distortions.

Officials claim that “deficits don’t matter,” but this is a fallacy, Paul contends, and one that is setting the stage for an economic crash.

The Federal Reserve has never warned of impending trouble, even when it was imminent. In Paul’s opinion, the Fed chairmen don’t know any better and they also don’t want to do anything that will cause panic.

Today’s growing stock market Paul finds interesting considering there is a net outflow of market funds. This indicates that the major correction needed by the PPT has not occurred.

Unusually low-interest rates allow buybacks, mergers and direct involvement in buying bonds and stocks by the PPT with funds the Fed has secretly provided to manipulate the gold price.

The Treasury’s Exchange Stabilization Fund, which President Franklin Delano Roosevelt funded in 1934 with gold confiscated at $20 an ounce and repriced at $35, continues to be allowed to engage in foreign exchange rates and the gold market, in Paul’s opinion.

Are People Waking Up?

Given the current problems, many people are realizing that excessive spending on war and welfare have created massive debt, and that such spending could not occur without the Federal Reserve permitting it. One possible solution is an alternative monetary system.

Various efforts are being considered to replace the fiat dollar with gold or cryptocurrencies, Paul noted, while other countries are challenging the dollar as the globe’s reserve currency.

When the price of an ounce of gold jumped from $35 to $800 in 1971, the dollar weakened, and Congress established a commission to examine the role of gold in the monetary system. Paul was a member of that commission, which voted (over Paul’s and others’ objections) to expand the fiat dollar standard, ensuring the problems would get worse.

The world is once again considering using gold in the monetary system. Those opposed to the renewed interest in gold and in blockchain technology are against a nongovernment alternative to the current monetary system.

Fiat money, being institutionalized by government, guarantees its mismanagement, Paul claims. It entices government spending and lobbying by special interests. Unfair distribution of wealth is a fiat money system characteristic.

The collapse in 1971 of the Bretton Woods Agreement that officially linked the dollar to gold led to the era of fiat dollar dominance as the world’s reserve currency, Paul noted. This has in effect created a government license to steal and led to the current financial crisis.

As the dollar has begun to fall in value, the race is on to find a replacement.

The leading contenders for Paul are a return to precious metals and cryptocurrencies. He said it is important to make sure that people can make the choice without being coerced by central banks or the government.

Such a decision will take a long time.

Competition is needed to determine if blockchain technology can deliver a currency that will supplant the historic acceptance of precious metals as money, Paul said.

He hopes U.S. leaders have enough sense before a crisis such as the one in Venezuela occurs. The market is capable of separating the advantages and disadvantages of precious metals and cryptocurrencies.

Cryptocurrencies and the gold standard could co-exist, Paul said.

The biggest challenge will be meeting the need to offer a currency with a specific definition of the unit of account. Such a definition cannot be arbitrary.

Today’s challenge is to consider the knowledge gained over thousands of years about money’s nature and apply it to today’s technology.

A manageable currency has to deliver confidence that a monetary unit can be reliably exchanged for something of value.

A lot of work will need to be done to control the power of government in order for society to be in a position to accept a denationalized monetary system, Paul noted. A modern currency will require an understanding of the proper role of government.

Politicians and investors are realizing the system of debt is not sustainable are quietly preparing for negative scenarios.

None of the measures, warns Paul, will help if the government is able to expand its power. He hopes that blockchain technology will not be used to support a value-added tax to give the establishment even more power to collect taxes.