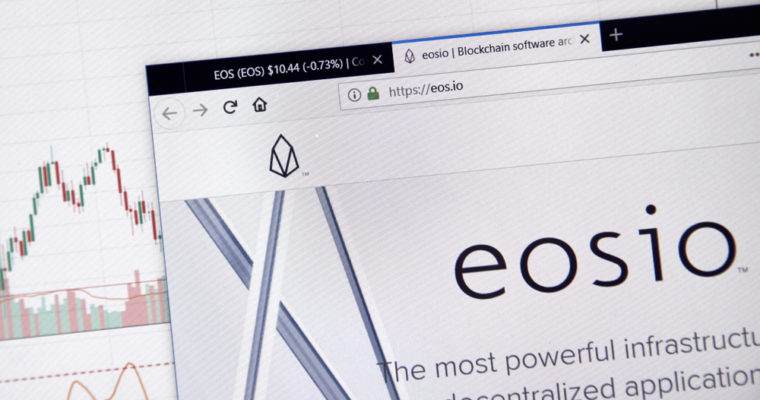 The EOS price headlined the large-cap cryptocurrency index on Wednesday after one of its chief architects proposed scrapping its controversial constitution and replacing it with a new one.

Overall, the cryptocurrency markets held relatively stable for the day, with the aggregate market cap dropping by about $1.2 billion over the past 24 hours.

Against this backdrop, the EOS price managed to mount a 5.4 percent recovery. At present, EOS is trading at an equivalent of $8.13 on Binance, with a circulating market cap of $7.3 billion.

While this movement may at face value appear muted, it constituted the best single-day performance of any top-40 cryptocurrency, and it was fifth-best among coins in the top 100.

Moreover, though not exactly phenomenal, this outsized performance was a welcome change for the asset, which since the launch of its independent blockchain had traded down significantly, not just against USD but also relative to bitcoin and ethereum. This decline correlated with a variety of controversies, ranging from a bug that froze the EOS blockchain for several hours to an alleged “constitutional crisis.”

Unsurprisingly, then, the EOS price bump appears to stem from optimism over a high-profile proposal to scrap the EOS constitution, which outlines the network’s on-chain governance model and replace it with one that allots less authority to block producers and arbiters, who had already blacklisted dozens of EOS accounts without immediate public justification.

As the chief architect of EOS, Block.one CTO Daniel Larimer helped write the original EOS constitution. However, just weeks after the network’s launch, he had already come to the conclusion that the “current constitution is not wise.”

“I have learned a lot about human nature by watching the disputes, the witch hunts, the ‘bring everything before ECAF [EOS Core Arbitration Forum]’ mindset,” he wrote on Telegram. “I’ve got [a] new [constitution] to propose that I believe will have full support.”

If adopted by the network, this new constitution will give users more autonomy while preserving their ability to opt-in to third-party arbitration if they so choose. Standard arbitration, Larimer says, should be reserved for handling disputes about the “intent of code” — not helping aggrieved users recover stolen private keys.