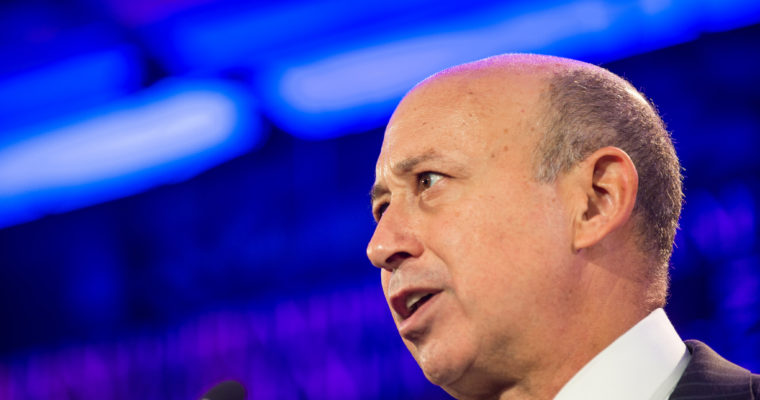 Goldman Sachs’ CEO Lloyd Blankfein continues to swagger back and forth about cryptocurrency.

Blankfein, who is expected to step down from his CEO position at Goldman Sachs in December, wore his “pro” bitcoin mettle Tuesday in an interview with Bloomberg Editor-In-Chief John Micklethwait at the Economic Club of New York. His latest statements are in line with those he made in early November when he said bitcoin could be a “next step” in the evolution of money. He said he was uncomfortable with bitcoin, but noted he had the same skepticism about cell phones initially.

When bitcoin’s price hit $10,000 in late November, he denounced it as a fraud and said its volatility undermined its usefulness as a store of value. He said he would reconsider this if it stopped fluctuating 20% in a day.

He had previously stated that he was open to bitcoin and that he wouldn’t let his own opinions affect the company’s strategy.

Not A Systemic Issue

“At this point, people are passionate for, passionate against it,” he said.

For his part, Blankfein acknowledged that he isn’t always right in predicting the success of new technology. When cell phones were introduced, he said, he wondered who would want to lug them around. “And besides, there’s 10 phone booths on every corner,” he recalled. “’This is a fad, nobody’s going to carry a cell phone,’ so I just passed on that whole thing.”

As for cryptocurrency, he said, “I can’t say why it should work. But if it did work, I’d be able to explain in hindsight why it did.”

Blankfein repeated one of his earlier observations in saying that cryptocurrency could have a place in the evolution of money. At one time, people only used hard currency. In time, a piece of paper was accepted to represent the hard currency.

While he himself doesn’t use cryptocurrency, Blankfein said it could nonetheless have a future.

“If it does work out, I could give you the historical path why that could happen,” he said. Just because it’s something he personally is not comfortable with doesn’t mean it won’t succeed, he said.

“That’s too arrogant,” he added.