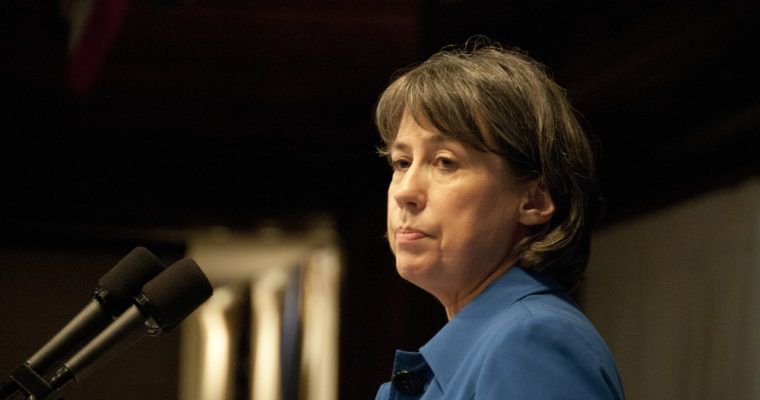 Sheila Bair, a former chair of the Federal Deposit and Insurance Corporation in the U.S., thinks the U.S. Federal Reserve Bank should seriously consider issuing a digital currency to reduce the risk of a financial crisis and improve monetary policy. Writing in Yahoo Finance, she noted that market volatility continues to shake confidence in banking systems.

The U.S. has experienced a subprime crisis in the last decade, while Europe suffered a debt crisis, she noted. Meanwhile, Italy is considering leaving the Eurozone while Brazil, Russia, Portugal, Ukraine and Venezuela have all experienced setbacks.

Bitcoin, designed to be a payment system outside of the banking system, has not succeeded in gaining traction a payment system, Bair noted, on account of its volatility. No one wants to pay with a currency that could double in value in a short period of time, or accept it if it should lose value.

However, a central bank could issue its own digital money, Bair said, noting that such an idea is gaining support among central bankers and economists.

A digital currency issued by a central bank would be just as stable as fiat currency. At the same time, there would be less risk of a financial crisis, and provide a better tool for monetary policy.

Banks and individuals currently deposit most available cash in banks through deposit accounts or by buying bank short-term debt, a system that works well under stable conditions, Bair noted. But when a crisis occurs, people withdraw uninsured funds from the banks and unsettle the flow of payments. This situation is known as a “bank run,” which even deposit insurance has failed to prevent.

If businesses and consumers converted deposits to digital currency, there would be no need to be concerned about bank instability as the Fed has the power to print money and make good on its obligations.

A digital currency would also reduce costs and inefficiencies of the existing payments system. Consumers would not have to have checking accounts to pay bills. Businesses, for their part, could evade having to pay interchange fees that banks and card networks charge.

Digital currency would also give the Fed better tools for performing monetary policy. The central bank currently controls the money supply by buying and selling securities from institutions and paying interest on reserves that the banks deposit with the Fed. When the Fed chooses to stimulate the economy, it purchases securities from the banks and lowers the rate it pays on the reserves. This gets the banks to lend the proceeds to the “real” economy and get a better return.

When the Fed wants to raise rates, it pares the holdings of securities and raises the rates paid on reserves.

The current system benefits the banks, but not the banks’ customers, Bair noted. In the last decade, the existing monetary tools have proven inadequate to boost economic growth. The very wealthy have increased their wealth while the middle class has been constrained.

An interest bearing “FedCoin” would allow the Fed to raise interest rates during inflationary periods when the economy is “overheating.” The interest would be paid to the public, motivating people to save rather than spend.

The Fed could reduce the rate on the currency during recessionary times, motivating people to spend and stimulate the economy. Should the economy still suffer, the Fed could issue special coins with a limited shelf life, bringing more stimulation. This tactic would work better than enacting a tax offering Social Security refunds, as was done during the Great Recession.

The FedCoin is not without risks, Bair noted. It could disrupt credit availability. There is currently more than $10 trillion deposited in demand deposit accounts at banks, which use the deposits to lend to consumers and businesses. The funds could disappear if the public moved their transaction accounts into FedCoin.

The risk of this occurring could be contained by limiting the amount of FedCoin issued and letting banks compete with it for deposits, Bair noted.

Basis, a private venture supported by Kevin Wash, a former Federal Reserve governor, uses an algorithm that stabilizes its value by issuing more currency when the price rises in relation to the dollar, and buying it back when the price drops.

It is not known if such efforts will succeed. But if they do, it will bring relief to retailers who hate paying interchange fees on card transactions, as well as consumers who hate account fees.

Such a scenario would be bad for the banking system, and for the Fed, which would stand to lose its ability to control the money supply. To prevent this, the Fed has to consider the merits of issuing its own digital currency. If it fails to stay ahead of the technology, both the banks and the Fed itself could be at risk.