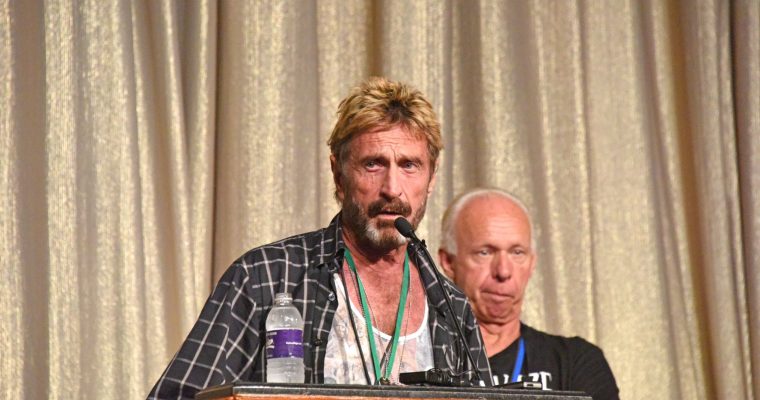 The currency, announced on Twitter and confirmed by McAfee in a subsequent interview with regional outlet Crypto-News India, appears to be distinct from McAfee Coin, which launched last year to little market demand and appears to no longer have a working website.

The physical notes come in seven denominations, ranging from 1 to 500 MRUs. Four of the notes feature pictures of McAfee in various stages of undress, including one in which he is surrounded by women, his nose covered in white powder (it’s a screenshot from this video). The other three MRU notes feature pictures of Bitmain founder Jihan Wu, cryptocurrency entrepreneur Brock Pierce, and Bitcoin.com owner (and Bitcoin Cash promoter) Roger Ver. It’s not clear if these three figures gave their consent to have their likenesses featured on MRU notes.

No hoax. The “McAfee Redemption Unit” is real and coming in 26 days. The graphic is low res – don’t want to give much away yet. Printed on currency paper, holographs on both sides, serialized, linked to the blockchain, redeemable, convertible, collectiblehttps://t.co/ySUwkDuW7s pic.twitter.com/75xTje39X8

He said that the currency will also have a blockchain component (because why not?) that will allow MRU holders to convert the notes back into fiat (for a fee) by returning them to the MRU Foundation.

Each MRU has an initial face value of $9.95 and can be redeemed for a one-minute in-person meeting with McAfee (yes, they’re stackable). McAfee said that 341,000 MRU notes of different denominations have been printed, with a total circulation of 6,050,000 MRU and an implied market cap of $60.2 million.

Assuming the 72-year-old McAfee set aside 10 hours per day to meet with MRU holders (including weekends and holidays), it would take him nearly 28 years to fulfill these obligations. Given his age and lifestyle, that timeline is perhaps a tad optimistic. In the event of his untimely death, MRU holders will not receive any compensation.

There’s a case to be made that the redemption process is perhaps even more convoluted than attempting to withdraw USD from Tether. According to a message printed on the notes, they can only be redeemed in person in Mexico during a two-hour window each day, at which time the owner will be given a particular date, time, and location in the United States in which he or she will be able to meet with McAfee. Individuals, incidentally, may only redeem 100 MRUs at a time.

Why is the process so difficult? In McAfee’s words:

“Redemption is purposely made very expensive. My followers are hugely loyal and I feel certain that many will go through time and huge expense for the opportunity to spend private time with me. See what this might do to the fundamental value of each redemption unit. If the value of a unit is based even remotely on the cost of redemption, which people are willing to pay, then the notes will immediately skyrocket. But the big key is in the way I have structured the auction sites. Cannot tell you more now.”

One Twitter user understandably asked McAfee whether it was wise to print a new currency “when the goal is to get rid of the existing one,” to which he replied “Patience. You will see. You’re just glimpsing a shadow of a shadow of what I’m doing.”