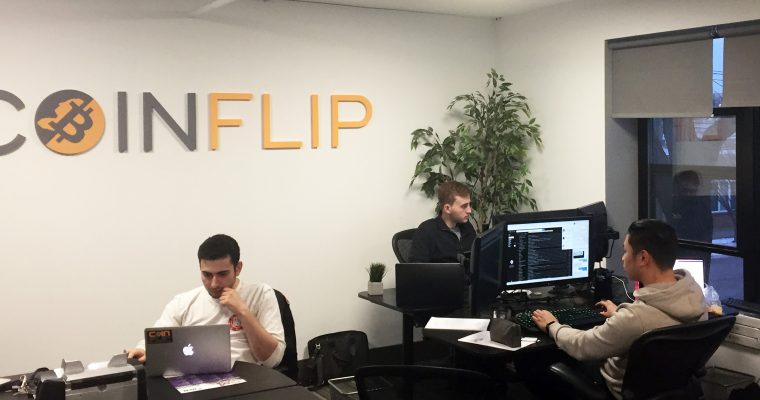 Chicago, IL – CCN correspondent Eric Eissler had a chance to sit down with Chief Operating Officer Benjamin Weiss of CoinFlip at its Chicago headquarters to learn about the company, the ATMs, and the general outlook on cryptocurrency.

In the United States, there are 1,545 cryptocurrency ATMs according to CoinATMRadar. The first Bitcoin ATM manufactured by RoboCoin appeared in Vancouver, Canada in 2013 and since then the industry is growing at a rapid rate with many companies producing ATMs, however, the majority of ATMs only buy and sell Bitcoins. North America has 76% of all the world’s crypto ATMs, followed by Europe with 19.5% and Asia with only 2.10% of crypto ATMs which is rather surprising given all the crypto activity in Japan and South Korea. For more information and statistics on crypto, ATMs check out more from CoinATMRadar.

Coinflip was founded in December of 2015. The company manufactures and distributes cryptocurrency ATMs that allow buying and selling of Bitcoin, Litecoin, and Ethererum all in one terminal. The rate charged at all CoinFlip’s ATMs is 6.9% above GDAX (Coinbase) spot price for buys, and 3.5% below for sells. The industry average buy rate is 8.86% based on 1,402 operational crypto ATMs. Buy and sell percentages are higher than using an online exchange, but the advantage is it is instant and in cash. For many online exchanges, there is a long lag period (usually days until the funds are in place) when buying with an ACH transfer from a bank.

CCN: What is Coinflip’s main goal?

Benjamin Weiss: We try to bring a physical aspect to something that is very abstract to people and that is why the ATMs have been such a big success so far. We have machines in over seven states currently with future national expansion and plan to be in many more places in a short time.

CCN: When did you form CoinFlip?

BW: December 2015 is when the company started and I would say it has really taken off since 2016.

CCN: Who is your primary user demographic?

BW: The demographics which are using the ATMs are crazy! It runs the gambit: from people who don’t have bank accounts and are using Bitcoin as their primary bank account, to people who are sending remittances to Mexico and other countries—because it is cheaper than traditional wire transfer services—to people high net-worth individuals who don’t want to buy Bitcoin from their computers and would rather just get it easily with cash by going to an ATM. Therefore, the spectrum is full, from one end to the other of the different demographics that are using the ATMs. There is no “average” user, it’s all over the map.

CCN: Besides buying Bitcoin, you can also make withdrawals? Essentially selling Bitcoin and taking the cash.

BW: Yes, on certain ATMs there is the sell option. However, it is so early in the game that most of the transactions we have are buys and not sells. But the number of people cashing out now is getting higher because crypto prices have increased. I think as the market matures and as the market develops, you are going to see an even ratio of buying and selling.

CCN: Your ATMs are unique because they are, from what I have seen, the first ones to offer withdrawals. Can you elaborate on this feature?

BW: At the time, it is really rare to see the selling feature on Bitcoin ATMs, but as the price keeps going up, our strategy going forward is to keep working on the withdrawals capabilities to make sure people have that option to cash out.

CCN: Can you elaborate on the sell feature? How are you able to do it?

BW: It’s a more expensive operational model. We add features such as cash recyclers, in order to prevent having to go and restock the ATMs with cash. Sure, it’s a bit hard from an execution perspective but it’s something that can be done. We are continuing to develop this feature.

CCN: Have you had a problem where someone is trying to take out a very large sum of cash?

BW: Due to compliance and regulations with federal laws, we have a $7,500 cap on withdrawals. We handle hundreds of thousands of dollars in online and wire transfers, but most people would not be comfortable with taking out that much cash. And of course, we have taken these and other measures to protect against money laundering. To go above and beyond the minimum regulations, we have added more security such as with transactions over $3,000, which require a social security number (SSN), source of funds, purpose of funds, and we run software that can validate the SSNs so fake ones cannot be accepted. However, we would never let users type in their SSNs into an ATM, this is done one time, over the phone with our customer support team.

CCN: So, you need to have an account to use the ATM?

BW: No, if the amount is more than $700 then you need to swipe your ID and we run a check to ensure you are not a sanctioned individual and you are allowed to use the financial institutions of the United States. You only need to register and this step is to prevent money laundering.

CCN: Which currencies can you buy at your ATMs?

BW: Bitcoin, Litecoin, and Ethereum. We are working on adding other coins, but I can’t say which.

CCN: What is your outlook on Cryptocurrency?

BW: Very positive. That’s why we have created these ATMs to make it easy for the average person to buy it. For the average person, it can be a challenge to buy cryptocurrency. There is this amazing financial technological revolution going on and we want to ensure everyone can take part; we want an ATM on every corner. We are motivated by bringing cryptocurrency to everyone.

Also, the use of crypto varies country to country. For example, in the U.S. Bitcoin is more of an asset or store of value, but in Venezuela, where the currency has been totally debased, Bitcoin is a life-saving payment system. Remittances are big for us, because it’s cheaper, faster, and more efficient.  With the implementation of the Lightning network the fees have come down, around $2.00 now and the transactions are much faster than they were a few months ago.

CCN: Bitcoin Cash was poised to take over based on speed and costs a few months ago, but now after SegWit and Lightning, what are your thoughts on Bitcoin’s longevity?

BW: It’s here to stay. Period. I could see Bitcoin at $100,000. I mean it’s so early in the game. I am a huge believer in it long term. It’s hard to have a serious investment portfolio that doesn’t include Bitcoin.

CCN: What are your thoughts on the Illinois Blockchain Initiative? The state agencies want to create a better, more secure system of record keeping.

BW: I think the Government, regardless of what they think of cryptocurrencies, they know that blockchain is amazing and they want to benefit from it. I think they should because look at the hit Equifax took with that data breach. If you had this information on a blockchain it would be way more secure. So, I think what you are going to see in the near term is the Illinois government and all other governments are going adopt this technology. You will see medical records, property deeds, ownership records, and all sorts of sensitive data is going to end up on blockchain. Once the Government and states do this, we hope that they will come to recognize that cryptocurrencies are another amazing facet of blockchain. There is room for companies like us, citizens, and government to all work together to reap the benefits of this technology.