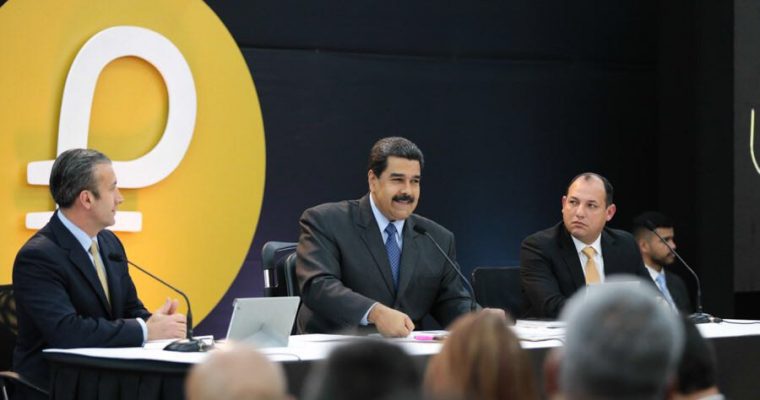 Venezuelan leader Nicolás Maduro recently said that the country received $735 million through the pre-sale of its Petro (PTR) cryptocurrency, in only one day. The Petro, as previously covered by CCN, is a cryptocurrency that’s set to help Venezuela bypass US sanctions, as the bolivar plunges.

Venezuela is notably the first country to launch its own cryptocurrency, and Nicolás Maduro celebrated the move by claiming it put the country at the world’s technological forefront. The Petro is set to be backed by the country’s oil reserves, and Maduro ordered 100 million Petros.

The Petro, according to reports, can be purchased with hard currencies and other cryptocurrencies, but not with the bolivar. It hit the market at a time in which Venezuela faces one of the deepest recessions ever seen. Food shortages force residents to make lines to buy common products, and use cryptocurrencies to survive.

Maduro didn’t offer any details on the investors that supposedly purchased $735 million worth of Petro tokens, nor did he provide any evidence for his figure. Yet, in a nationally broadcast show, bullishly implied the token put Venezuela on the vanguard. He said:

“We have taken a giant step into the 21st Century,” Maduro said in a nationally broadcast show. “We are on the world’s technological vanguard.”

The country’s president added that tourism, gasoline sales and some oil-related transactions could be made in Petro. Although Venezuelan officials haven’t yet released a lot of details on how the Petro will work, he stated that the cryptocurrency is the “kryptonite” that can take on Superman – the comic character being code for the United States.

The Petro’s official website is now up and running, and has already published a guide on how investors can set up a wallet. Carlos Vargas, the country’s cryptocurrency superintendent, has recently stated the government was expecting to draw in investors from Turkey, Qatar, Europe, and the United States.

However, by buying the Petro, US citizens and companies would be violating sanctions, according to the US Treasury Department. Analysts have been advising potential investors that investing in the cryptocurrency may not be the right move.

“My advice would be to tread very carefully with this — especially considering the track record of the Venezuelan government.”

As covered by CCN, Venezuela’s opposition-run congress has also declared the cryptocurrency sale an “illegal and unconstitutional” instrument, as it is seen as an effort to illegally mortgage the country’s oil reserves.

Jean Paul Leidenz, a senior economist at Caracas-based EcoAnalitica, revealed that Maduro said the underdeveloped Orinoco oilfield will back the digital currency. This means there may be no tangible oil barrels investors can trade the Petro for.