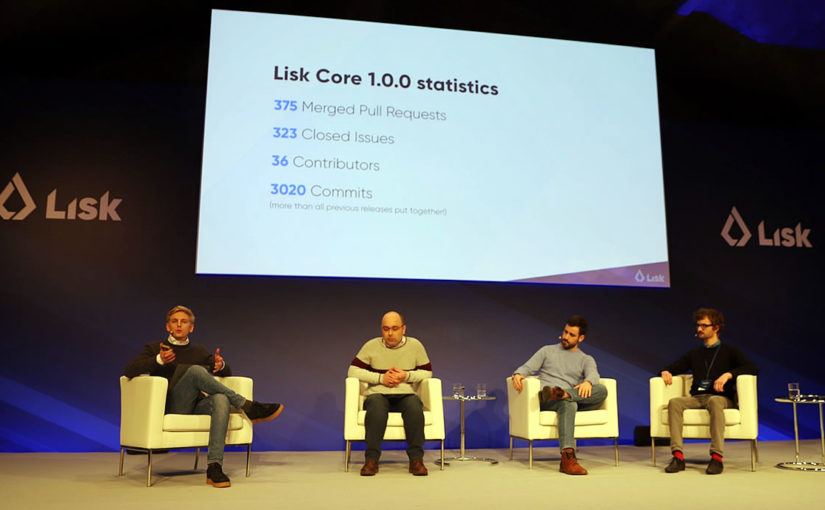 A relaunch or rebrand usually does wonders for a cryptocurrency or blockchain project. The latest to revamp their look, website, and products is Berlin based Lisk which held an event yesterday. The team addressed an audience of over 500 highlighting new products, core updates, and a vision for the future.

The conference started out with a fancy introduction and a keynote by Max Kordek, co-founder and president of the Lisk Foundation. His main focus was on the goal to make blockchain technology open for everyone through the Lisk platform. Christian Vatter from Rlevance then took the stage to explain how the company achieved its new branding and what Lisk actually is.

In its strive to make blockchain technology accessible for everybody Lisk has built a blockchain application platform for users and developers to build upon, one with aspirations to be so successful that any Javascript developer can jump onboard immediately. The ethos being that it is not about the technology but the benefit to the people.

A new series of product names were then introduced by marketing lead Thomas Schouten. These included Lisk Core which remained unchanged, JS and Lisky which are part of the SDK, were rebranded to Lisk Element sand Lisk Commander, and the App became Lisk Hub. Lisk Nano will be discontinued and Lisk Hub will take its place to act as a one-stop dashboard, combining the functionality from the wallet and blockchain explorer. The presentation continued to show the basic workings and setup of the platform for developers. A series of professional videos were shown before a new website was unveiled to be launched this week.

Jacob Kowalewski then introduced the Lisk Academy which aims to educate on blockchain technology and instruct on how to implement blockchain into business. A technical panel explained Lisk Core 1.0.0. which will be a culmination of development efforts over the last few months. Its release will be a major back end milestone ahead of the rollout of the entire Sidechain Development Kit. Finally, Kordek wrapped up summarizing the event and thanking the contributors and audience.

And that’s a wrap! We’d like to thank the entire #Lightcurve team, all of our contractors, community members and industry friends for making the #LiskRelaunch such a special event. 🚀 pic.twitter.com/ktjLwahIar

The Lisk team offered some seriously slick marketing and plans for the future however its price action has taken a beating along with the rest of the altcoins during trading today. LSK is down over 10% on the day but marginally over the week, it is currently trading at $25.74 according to Coinmarketcap.

Looking at the bigger picture LSK has doubled since the February 6 dip and has shown steady increases over the past 3 months climbing over 250% from its late-November levels. The total market capacity for LSK is $2.6 billion and $223 million has been traded in the past 24 hours, the total supply is only 118 million. Lisk has shown to be a very resilient digital asset, and if the conference was anything to go by the team has huge plans for the future of blockchain industry.